A Day on the Lake 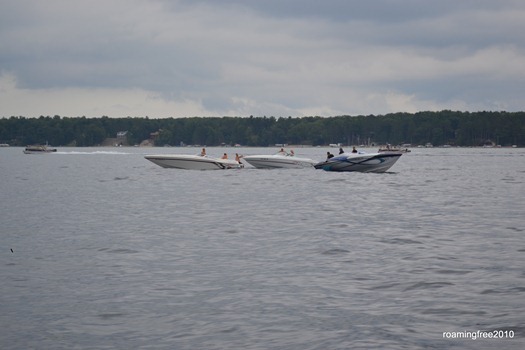 OK, well we didn’t quite get one of THOSE boats . . . but we did rent a lovely pontoon that had just enough horsepower (fishpower??!!) to pull the kids around on a tube! 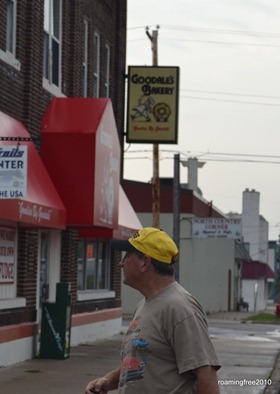 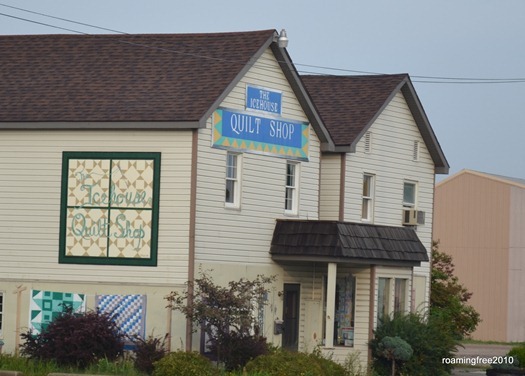 we arrived at B&B Marina on Higgins Lake and got loaded up on our rental pontoon for the day. 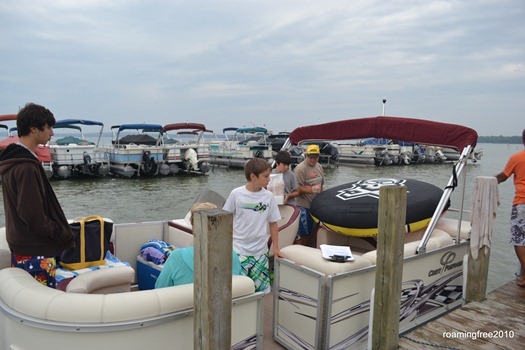 The sky was pretty much overcast, but heck – we had a 60% chance of NO RAIN!  Everybody got situated, and we headed south.  Higgins Lake is quite a big lake, and the marina was at the far north end of it, and our friends we were meeting up with were on the far south end of it . . . so we had some travelling to do! 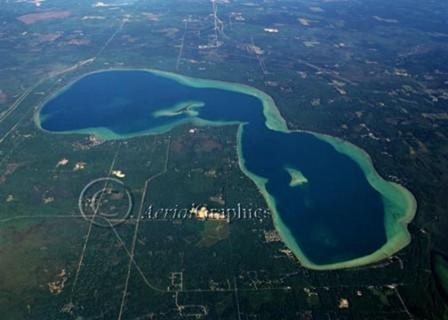 Despite the cold morning temperatures (did I mention that we had to pick up the boat at 8:30am?), the kids (well . . . a couple of them) decided to go swimming. 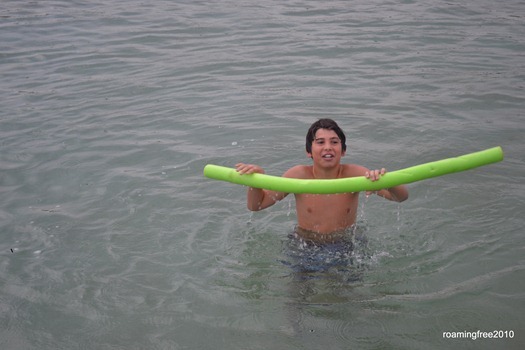 About the time Bryce and Jensen were turning blue, the rain started!  We huddled under towels and hooded sweatshirts, and made our way south as quickly as possible in the driving rain! 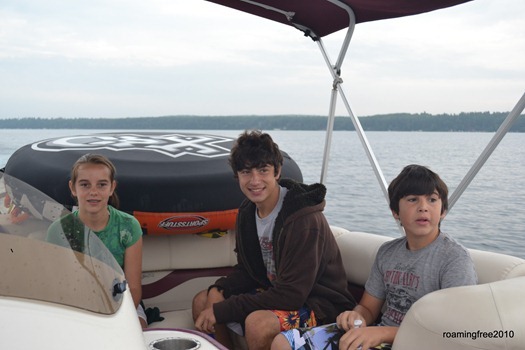 OK, this was before the rain started . . . still happy!

We spotted Nancy & Andy’s cottage just as a HUGE bolt of lightening struck something not too far away – we got the boat tied up to the dock, and made a beeline for shelter!

We spent the next hour or so catching up [Nancy was daycare provider to Nicolas & Bryce, AND Hannah & Jensen] and visiting.  Another former daycare family [co-worker of Tom, myself & Paul] arrived with their 3 boys and boat, and Nancy’s son & girlfriend got back from a run to the grocery store soon after we arrived.

As soon as the rain stopped and the sky started to clear, the kids were ready to get back in the boats. 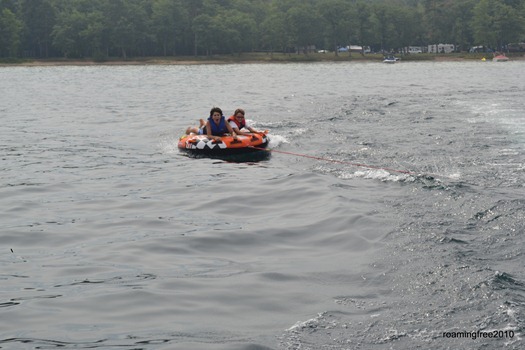 Bryce and Jensen went first, and had a great time bouncing over the waves.  They started getting a little bit daring, and eventually ended up in the water! 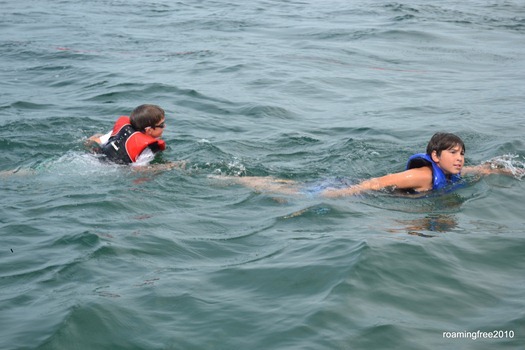 They didn’t mind, though, and came right back for more! 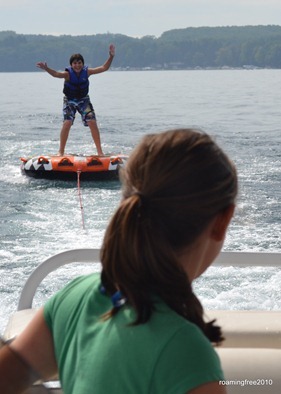 Bryce thinks he’s a stuntman, standing up on the tube!

Andy has a nice speedboat, and he took some of the older guys tubing and beat them up a bit!  Tom even tried skiing . . . and regretted it! (didn’t have my camera handy for that one – I was in the water!) 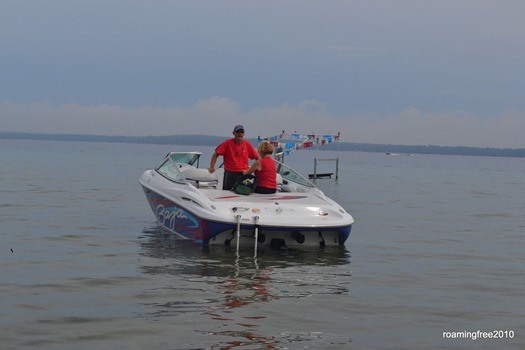 After a potluck lunch back at Andy & Nancy’s cottage, it was time for some more tubing – this time just behind the 2 speedboats. 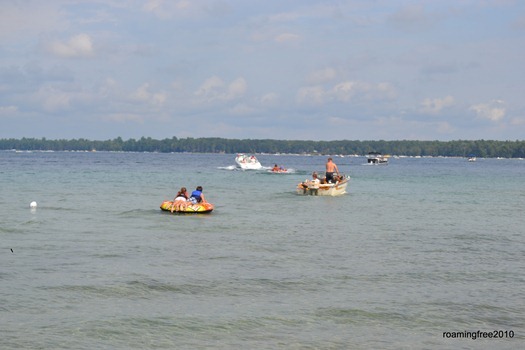 Bryce and Hannah went behind Carl’s boat (and from what I heard, he whipped them around pretty good – sent them both flying off the tube!) 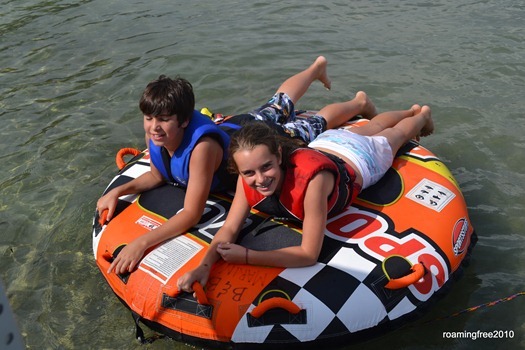 and Nick and Reed went behind Andy’s Baja – he took it a little easier on them! 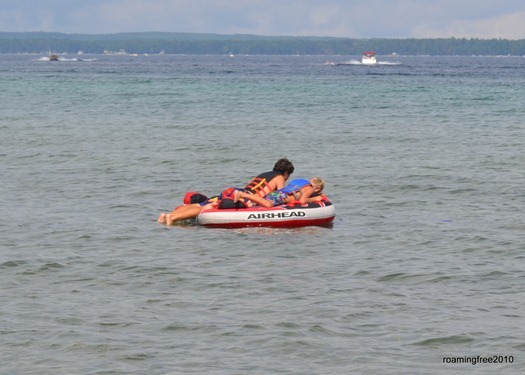 Once that morning rain got out of the way, the day turned out to be pretty nice – we even got a few peeks of sun!  We had to get the pontoon back to the other end of the lake by 5:30, so it was time for us to wrap things up and start making our way north.

The kids decided that they wanted to ride the tube back to the marina, so Bryce and Jensen hopped on first. 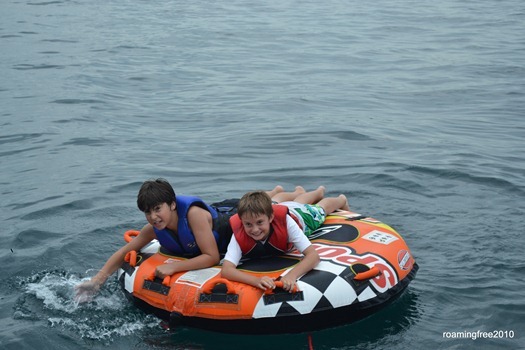 By the time Hannah traded places with Jensen, the water had gotten pretty rough so she and Bryce got quite a ride! 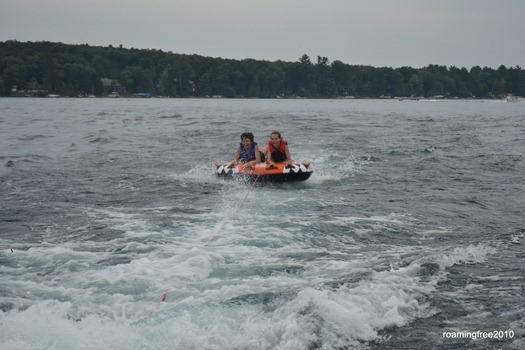 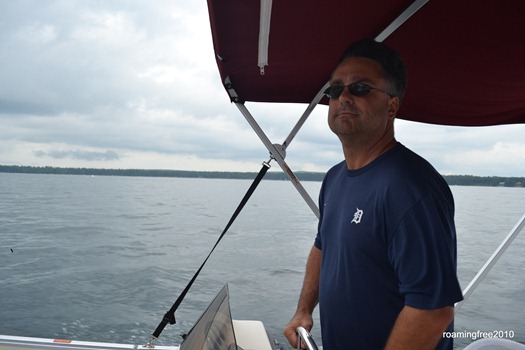 and with all passengers accounted for!

We all enjoyed our day on the lake, spending time with old friends . . . 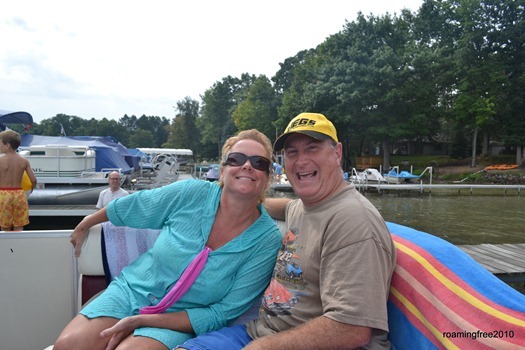 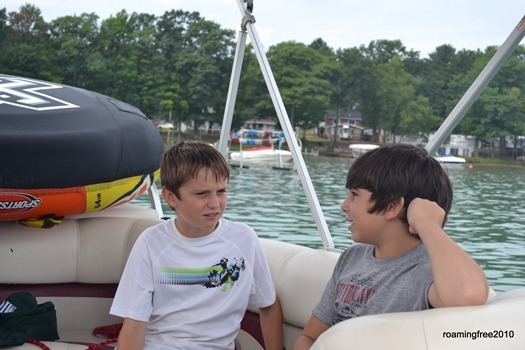 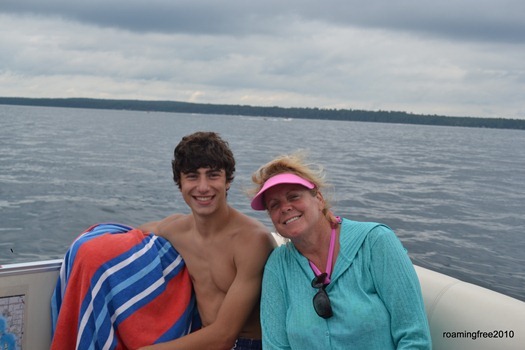 . . . and even though it could have been a little bit warmer, we all managed to get a bit of sun!  Maybe next year we’ll try to do this earlier in the summer!