I bet you thought we fell off the face of the earth, didn't you?  Well, we're still here!  We had a little computer trouble (my 5-year-old laptop died unexpectedly one day), and although we were able to get it revived enough to get all the pictures and files off it, it died again a few days later!  So, we ordered a new Windows 10 laptop, and I'm still getting used to that.  One program I was not able to get back was LiveWriter, so I am back to composing blogs in Blogger . . . we'll see how that goes! 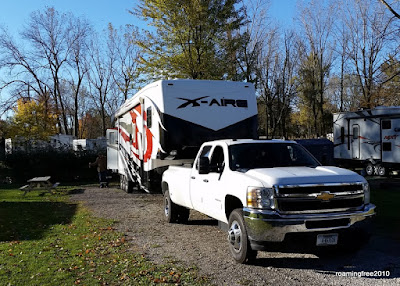 and arrived in Charleston in this! 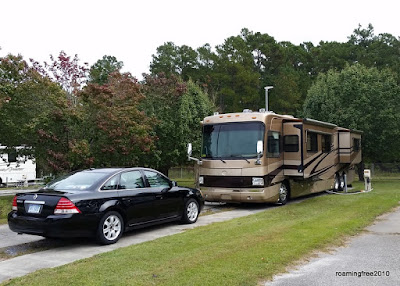 So, let me back up a little.  When we were on our way north from Georgia in August, we stopped at Day Bros. RV Sales in London, KY to look at a few motorhomes.  Maybe it was the truck fiasco, and maybe it was the blown tire on the RV, but we were ready to make a move!  We found this 2006 Monaco Dynasty Diamond IV, and it was very promising -- just needed a few fixes.  We put a $1000 deposit on it, and left them with a list of repairs that we were looking for when we returned.

When we arrived last week, most of that list was complete, plus a few more items that they found along the way.  We spent the weekend checking it out as best we could, and had a new list of "fixes" when the dealership re-opened on Monday. 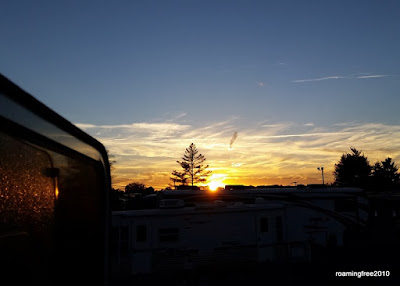 We spent the next several days with the technician, going over the various systems in the coach - learning about them and making sure they worked correctly.  We also discovered a few more problems -- water problems -- so those had to be taken care of right away!  One was a leak in the shower valve, and there was no access panel to the back of the shower!  The tech was all ready to remove the shower stall when Tom suggested that he just cut an access hole behind the escutcheon, and make a new cover for it out of stainless steel.  Voila - an access panel!  That turned out to be a fairly simple fix, but the bigger problem was the kitchen drain that travels in the slide-out.  It had a tendency to get hung up as the slide was coming in and put stress on the joint, causing it to leak.  It looked like it had been fixed once, and our tech fixed it again . . . and a couple more times before the week was over! 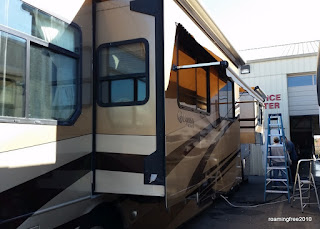 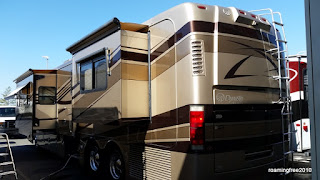 Tom kept hanging out at the coach while the tech worked on it, and he and Bryce took care of some of the smaller repairs . . . trying not to get in the way, or be too much of a distraction.

We made good progress, and by Wednesday evening felt comfortable enough to start moving in!


They moved the motorhome over to the site next to our camper, and the work began! 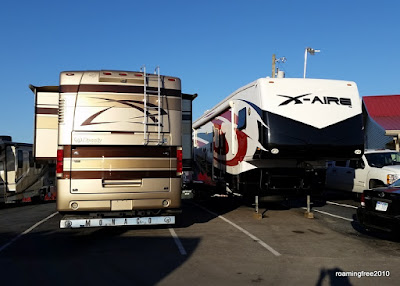 Tom and Bryce kept carrying stuff over to the motorhome, and I was trying to figure out where to put everything . . . I thought I was doing pretty well . . .  I still had empty cupboards in the bedroom . . . but then I started in the kitchen, and it soon became clear that I had TOO MUCH STUFF!! 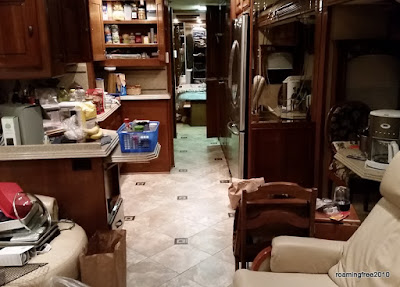 There was still so much work left to do!  We gave up at midnight and went back to the X-Aire to sleep, but we were back at it first thing in the morning! 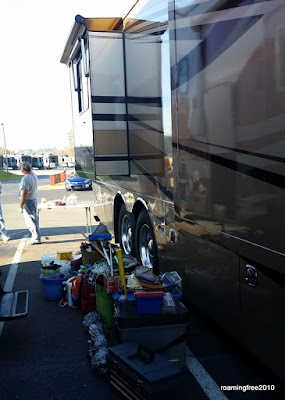 We continued to move stuff over and find places to put it all away, and the inspector from the Extended Warranty company arrived and started going through the RV with our technician.  Since we had been through everything pretty thoroughly, we left them to do their thing without us.  We did go on the test drive with them, though, and it was while putting in the slides that we discovered that the kitchen drain on the slide had broken . . . that was going to keep us from getting out of there on Thursday as we had planned!

The test drive itself went fine, although I found out the importance of making sure that the refrigerator doors were latched . . . Tom made a sharp left turn and most of the contents of the refrigerator ended up on the floor!  Luckily, we had no broken glass or exploding pop cans, but I did have a plastic container of spaghetti sauce all over the floor, the frig, and the cabinets across from the frig!  Lesson Learned! 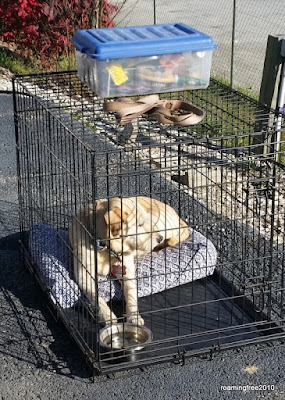 Back at the RV Dealership, we got a passing grade from the inspection and after a quick lunch, we continued moving.  Our technician consulted with a few other techs on how best to fix the drain so that the movement of the slide would not overstress the fittings.  While we all worked, Casey relaxed in her crate!
Slowly, but surely, we were getting things put away . . . 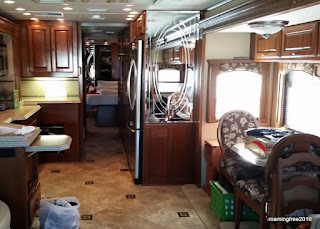 ﻿By the time the drain was fixed and we finally finished moving everything over, it was too late to get on the road, and we never did get around to signing the papers to purchase the motorhome!  We would stay one more night, and try to get an early start in the morning for our 460 mile drive to Charleston. 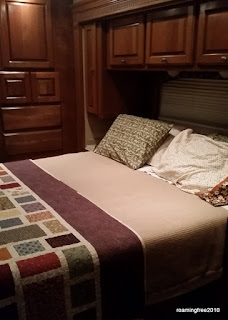 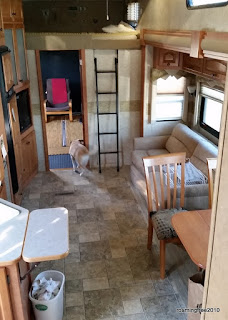 We took one more look through the toyhauler to make sure we hadn't left anything behind, and then went to Steak & Shake for a celebratory dinner.  The dealership had agreed to let us take our mattress and recliners from the X-Aire, so with those items moved, we were officially "home".

The next morning we signed all the paperwork to trade the Silverado and X-Aire for the Monaco, they topped off our propane and diesel (half tank of diesel - even Tom couldn't get them to fill it all the way!), and we were ready to go! 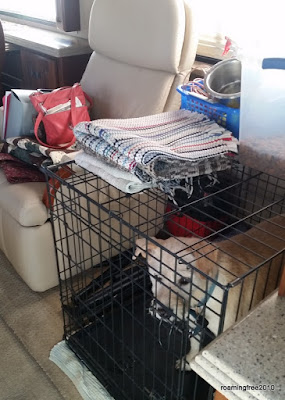 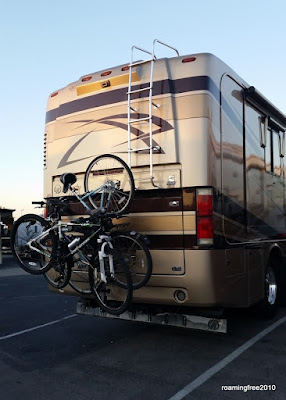 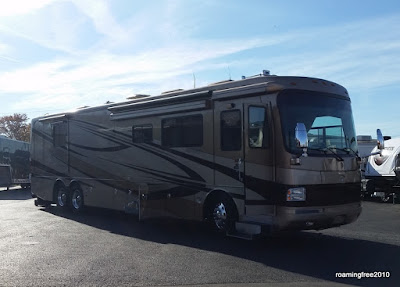 It was a beautiful day for a drive, and there wasn't much traffic for a Friday.

Tom was cool and collected behind the wheel! 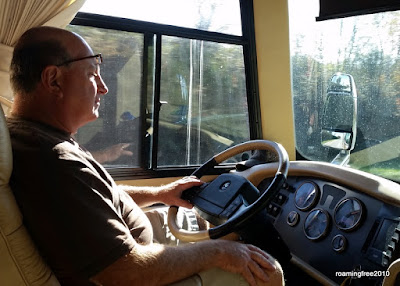 We took I-75 south to Knoxville, where we picked up I-40 through the Blue Ridge Mountains, enjoying the view the entire way. 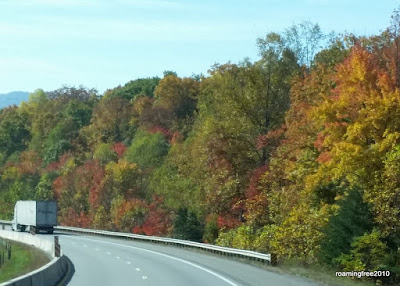 I've got a great view out the front windshield! 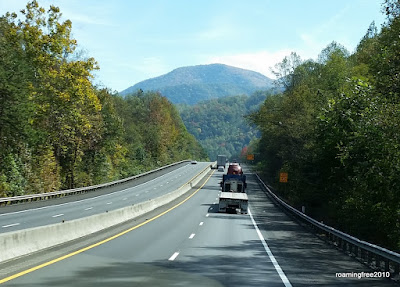 We picked up a little traffic in Columbia, SC, which delayed us some, but we finally made it to the Navy base by 7:30pm, where Nicolas was waiting to check us in, and check out the new RV! 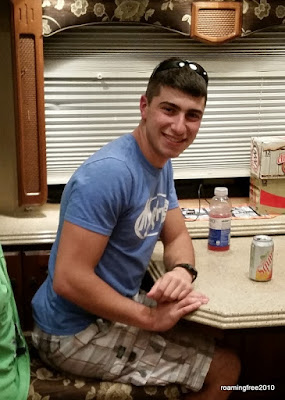 We've got a few projects to take care of, and then it's just getting settled and making this into our new home!  We're getting there! 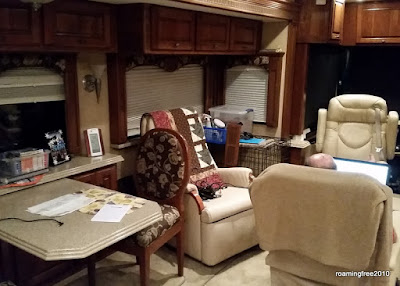 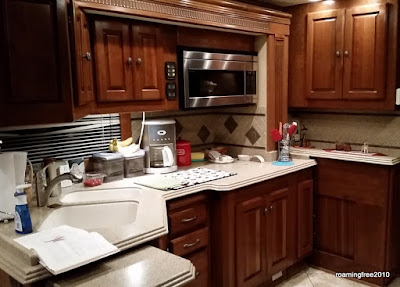 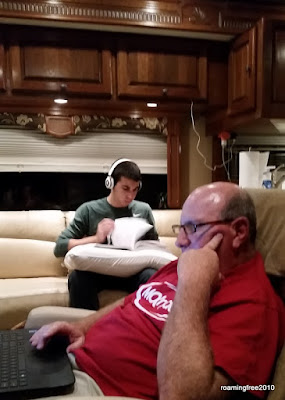