So much to be thankful for! 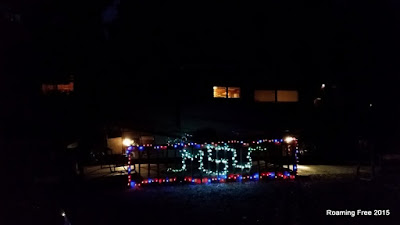 We chose Savannah as our destination for November and December so that we would be close for Nicolas to spend Thanksgiving with us if he was able to get away from studying.  He's doing well in Power School, and was far enough along in his studying that he felt comfortable coming down for the weekend.  Yay!!

He arrived around 6pm on Wednesday, and we had a campfire going and Bryce's Christmas lights so he could find our site easily in the dark!  Wednesday's dinner was a simple camping favorite -- brats and hot dogs over the fire -- YUM! 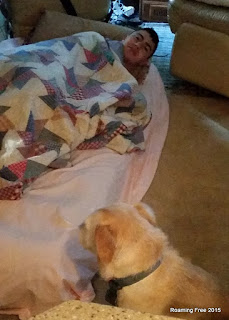 This was Nicolas' first time staying in the motorhome with us, and Bryce wasn't giving up his couch -- so Nick got the air mattress on the floor . . . he didn't mind!

Casey was confused by this guy on the floor!!

We stayed up late watching a movie Wednesday night, and all slept in on Thursday morning until almost 9am.  Nicolas couldn't believe he slept that long -- I think he needed to catch up a little!

While I got the turkey in the oven, and worked on the rest of the dinner, Tom and Nick took a long walk around the campground, and Later Bryce and Nick went for a bike ride on some of the trails.

Dinner was ready by 3pm, and it was delicious! 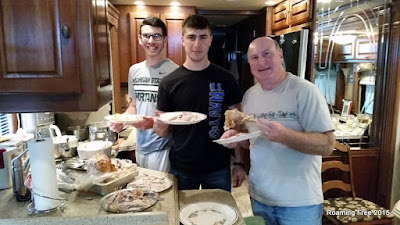 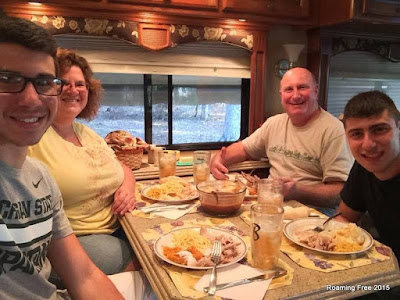 I was pretty impressed by my Sharp convection oven . . . I wasn't sure how I was going to like it, but it performed really well!  We made homemade dinner rolls on Wednesday night which came out really good, and the turkey was excellent!  I cooked it in a oven cooking bag, so it wouldn't make a mess of the oven -- it worked really well.


After dinner, it was time for another long walk, 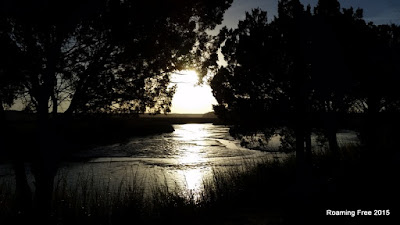 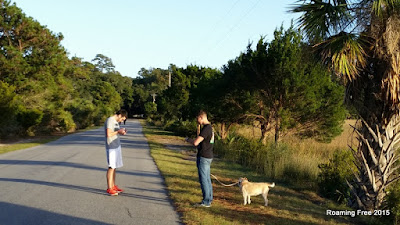 and then we headed into Savannah to do some shopping.

In general, I'm not a fan of all the stores being open for "Black Friday" deals on Thursday, but in this case, I considered it a family outing . . .  and it would give us more time for fun stuff on Friday!

Nicolas was due for a new laptop, and he had found one in the Best Buy deals.  We didn't camp out all day, and we didn't even get there when they opened, but we joined the crowds shopping for electronics!  We were amazed, when we arrived at 6pm, that there was still a line of people waiting to get in the store (doors opened at 5pm), but it just turned out that they were controlling the number of people entering at a time . . . we only waited outside for about 15 minutes.  Once in the door, Nicolas found his laptop and Bryce picked up a couple of new XBox games that he wanted . . . and that was it -- we were done shopping!  One more quick stop at Big Lots (just because Tom felt like it!) and we were back home by 8pm. 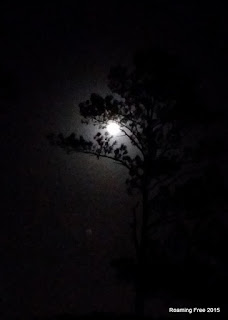 I tried to get a picture of the full moon as we crossed the causeway to the campground.

Back home, we watched San Andreas and I made strawberry turnovers for our dessert.

Friday's plan was to do some exploring and shopping in downtown Savannah, an early dinner and ice cream later at Leopold's, and possibly visit Tybee Island (although I was the only one really interested in going over to Tybee) . . .  but first we needed to stop at the Verizon store to see about a new phone for Nicolas.

That turned into a complete fiasco!  We all slept in again, so we got a late start, and didn't arrive at the Verizon store until about noon.  We were pleased to see that they weren't crowded, and Nicolas was able to decide on a phone and his plan fairly easily.  The trouble started when they try to conduct the transaction . . . Verizon's system crashed and nobody could get anything processed.  They kept trying, and we hung around . . . but eventually decided to get something to eat next door at Zaxby's (so much for getting a nice early dinner downtown!).  When we got back, the system was still down!  The clerk said that he could have Nicolas pay, then he would continue trying to process the transaction and we could pick up the phone later.  So, that's what we did, and after 3-1/2 hours, we walked out of there . . . still without a phone!

We put that out of our minds and headed to downtown Savannah! 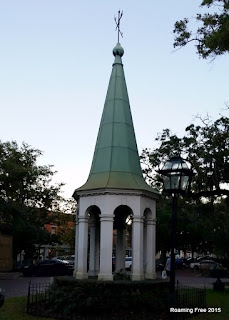 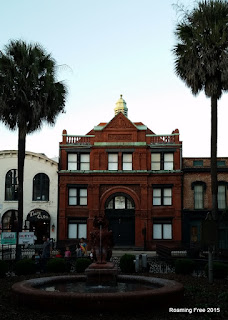 Nicolas was done shopping (he HATES spending money -- especially when it's his!), but Bryce was on the lookout for some gifts.  We walked along River Street, and then headed over to the City Market area. 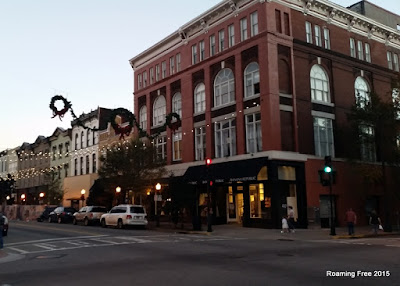 I didn't think we'd been to this area when we visited Savannah 3 years ago, but when we saw some of the shops we remembered being there before.

It was a lively Friday night, with Christmas decorations up , 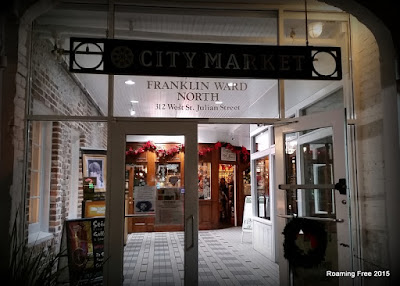 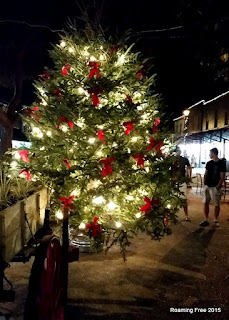 and bands playing music in the street.  There were lots of people walking around and shopping!

We found the Tea & Spice Merchant that I wanted to get to, and the Paula Deen store . . . and then made our way over to Leopold's Ice Cream. 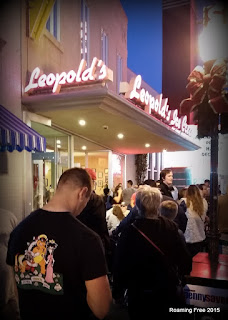 Now, I know we didn't discover Leopold's the last time we were here, but we're sure glad we did this time!  There was a line on this beautiful, warm night . . . but it didn't take too long.

Nicolas and I both got homemade chocolate chip ice cream sandwiches, and they were good -- messy, but good!

With our shopping and snacking complete, we headed back to the campground.  We thought we'd make a quick stop at Verizon to pick up the phone, but that turned into ANOTHER hour and a half!  When we got there, the guy we had been working with had gone home and nobody knew what he did with the phone Nick had purchased.  The good news was that the system was back up, but nothing had been done with Nick's phone so we were back to square one!  What a nightmare!  They finally got the phone activated and his verizon account opened, and we went home.

Back at the RV, I set up his account and applied for his military discount (you have to do everything yourself now -- they don't do anything in the store!), and loaded some software on his new laptop.  I thought we were done then, but the screen on the phone started acting up . . .so we had to make yet one more trip back to the the store on Saturday to exchange the phone for a different one!  Another hour and a half!!  Nicolas was almost ready to forget the whole thing . . . but he really was overdue for a new phone, so he hung in there, and hopefully he's all set now.!

This afternoon, we went to dinner at Fish Tales, a restaurant/tiki bar right outside the state park. 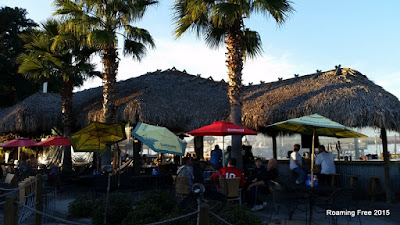 The food was pretty good . . . although not quick! 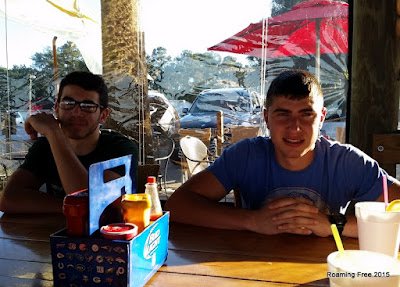 So, Nick got a little bit later start back to Charleston than he planned, but he still made it back in time to do a little bit of studying tonight, and then he has all day tomorrow, and his first final isn't until Thursday.

So we said good-bye again, 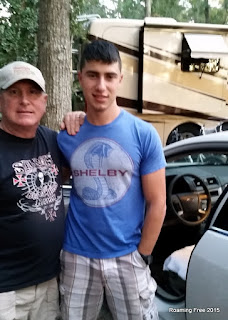 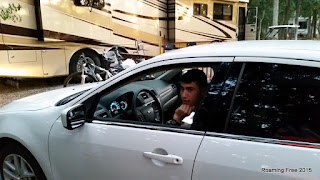 but we'll be heading to Charleston ourselves in just 2-1/2 weeks for his Power School graduation!

It was a wonderful Thanksgiving weekend, and although we weren't with the rest of our families, it was so nice to have our own little family together for the holiday!  We are very thankful!