On to the Treasure Coast 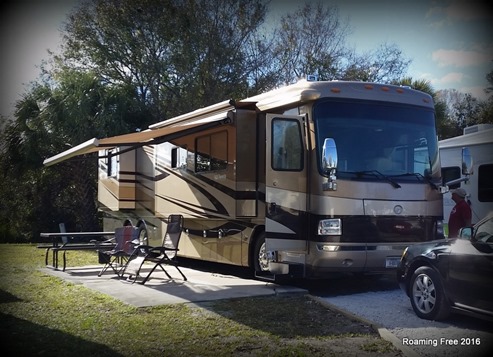 Back at the Monacoers Gathering, there were several door prize drawings throughout the week.  We’re not the lucky ones, usually, but we happened to be sitting next to the guy who won a gift certificate for re-chroming of a set of mirror arms and bases.  He couldn’t use, it, since his motorhome has black mirrors, so he passed the prize on to us!

We were really grateful, since that was one thing on our motorhome that looked pretty bad – the chrome on the bases was pitting and bubbling quite a bit.

Space Coast Plating, owned by one of the Monacoers, is located in Melbourne, FL on the Atlantic coast.  We made arrangements to bring the mirrors to them on Feb. 29th, and made reservations at a nearby RV Resort in Malabar.  If they had a completed set of bases and arms that matched ours, it would be a quick swap, but if they had to re-chrome ours, it could take up to 10 days, so we went ahead and booked our site for 10 days.

It was an easy drive across the state on Highway 70, through Arcadia and Okeechobee, and then we picked up I-95 in Fort Pierce and travelled north to Malabar.  We were parked and set up by 2pm!

Tom and Bryce got right to work, removing the mirrors so we could take them to the shop first thing Monday morning.  When we got there, they did have a set of the same size, so that was good, but we had a little trouble getting the arms separated from the bases, which needed to come apart in order to get the wiring harness out.  We left them there, and they were going to work on getting them apart; Tom and Bryce would go back on Tuesday to pick them up.

Bryce had told me that he wanted to go to a Washington Nationals game while we were here – their spring training camp is in Melbourne & his current favorite player is Bryce Harper, an outfielder for the Nationals.  We looked at their schedule, and the Tigers were coming to town on Saturday, so we thought that would be a good game to go to.  Since we were in Melbourne Monday morning, we stopped by the box office to buy tickets.

As we drove into the parking lot, Bryce noticed a baseball on the ground, so he stopped to pick it up – must have been a foul ball during batting practice.  He spotted a few players on the practice field, and walked over to the fence to see who was there. 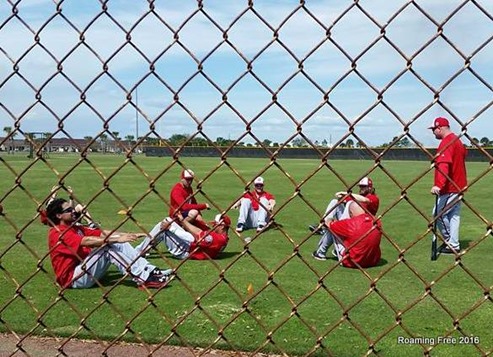 It just so happened that one of them was Bryce Harper!  We watched them for a few minutes, and as they were coming off the field, Bryce tried to get an autograph on the baseball he found . . . 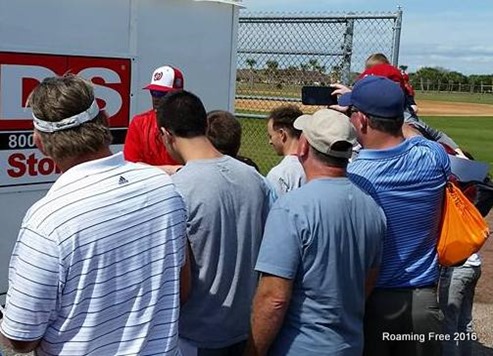 but no luck!  A few of the younger kids got autographs, but I guess Bryce was not little enough!

Maybe he’ll get another chance at the game on Saturday!

On Tuesday, Tom and Bryce went back to pick up the new bases and arms and re-assemble them to our mirrors, they brought them back and installed them on the motorhome.  Tom polished everything, and we have great-looking mirrors now! 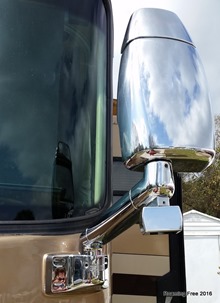 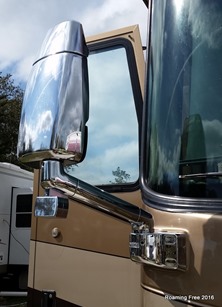 The rest of the week has been pretty low-key, but with the excellent weather, we have enjoyed a couple of late afternoon visits to the pool, and tonight went out for ice cream after dinner! 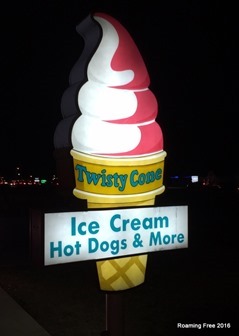 We’ve got some friends in the area, so in addition to the baseball game on Saturday, we’re hoping to enjoy some hiking or biking, too!