A quick trip to North Carolina

Going back a week, after we successfully delivered Dad to the airport in Charleston for his flight back to Michigan, we got back to the Refuge and opened the Visitor Center for the day.

We don’t get a lot of traffic out here, but on Saturday we did have a few birdwatchers come in, as well as two couples from Alberta that we had met at the BBQ restaurant the night before, and a group of scouts. 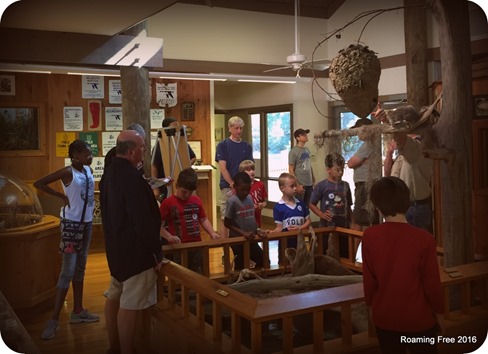 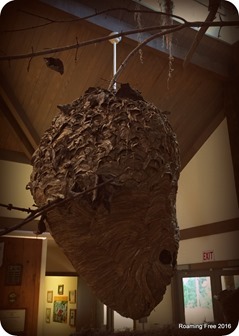 They were checking out the large hornets nest, the items on the touch table, and especially the upstairs viewing area of the Osprey nest. 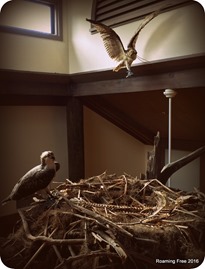 The alligator head was a pretty big hit, too! 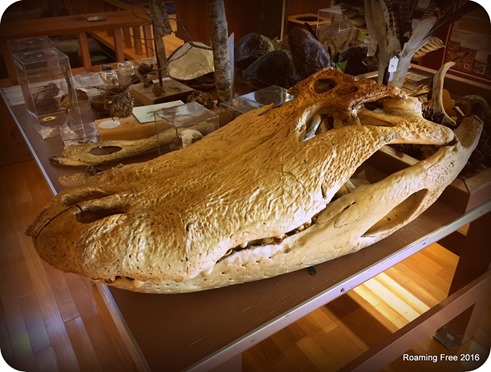 We’ve had some pretty amazing weather here in middle South Carolina for the beginning of November. 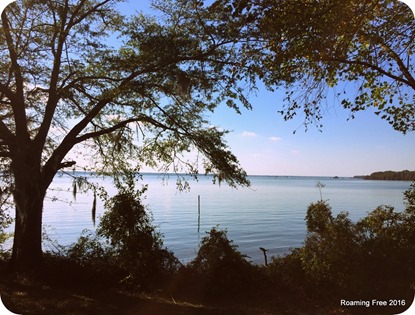 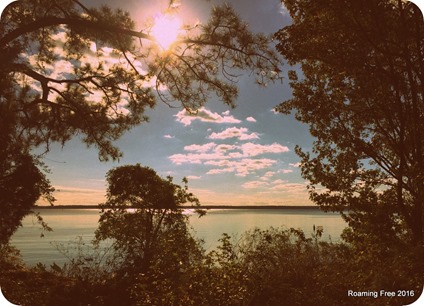 Actually, in my opinion, it’s been a little too hot – high 80s – and the mosquitos have been brutal!

The butterflies love the hot weather, though! 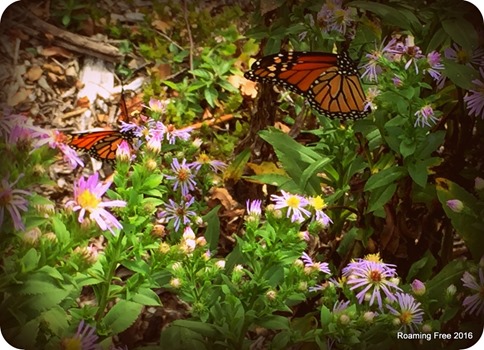 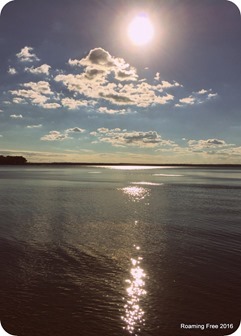 Not much in the way of fall colors around here yet! 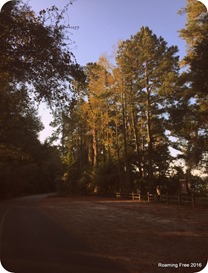 We haven’t been able to do much bike riding lately either – too buggy!  I’m hoping for cooler temperatures to get rid of the mosquitos! 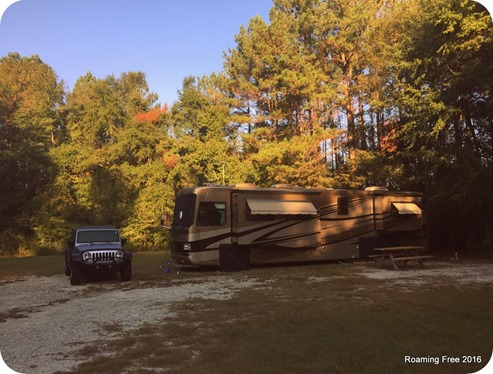 This past weekend, we took a quick little trip into North Carolina.

When we were at the Monacoers Gathering at LazyDays last winter, Tom met some guys who had developed an improvement to our Roadmaster chassis to help minimize the effects of things like road crown, wind and trucks passing.

Tom has continued to talk to them all this year, and made plans to get the watts link installed when we got down to South Carolina.  Last weekend fit into all of our calendars, and it also happened to be Nicolas’ weekend off, so he went with us. 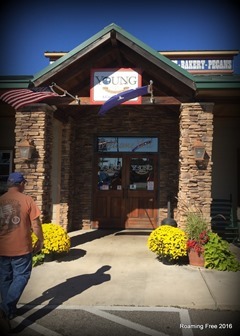 We were going to Van’s house near Pinehurst, NC, which is not too far over the South Carolina border, off I-95.  It was a pretty easy drive for us.  They had another coach to work on first, and told us to arrive in the late afternoon on Saturday.  We only had about a 3 hour drive, but we got on the road by 10:30 anyway.  We stopped for lunch and fuel in Florence, and the truck stop just happened to be right next door to the Young Plantations Pecan Store.  WE just had to stop in for free samples, and take some yummy pecans home with us!  Nicolas even picked a few pecans off a tree in the parking lot!

As we continued north into North Carolina, the drive became more scenic, and we started to see a little evidence a fall colors! 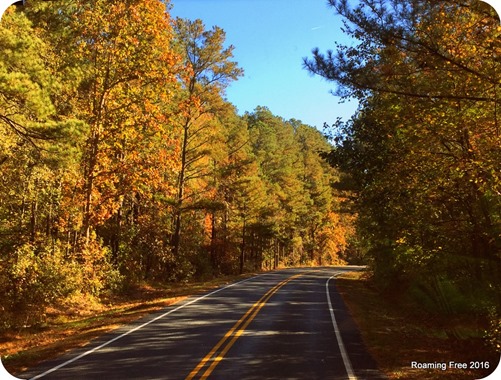 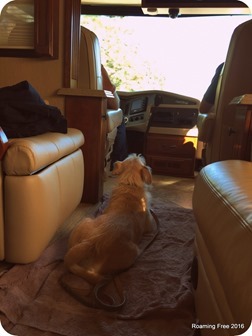 Casey went with us, too, and for the first time travelled not in her crate.  It took her a little while to settle down, but she finally found a comfortable spot between the pilot and co-pilot!

Most of the time they kept their eyes on the road! 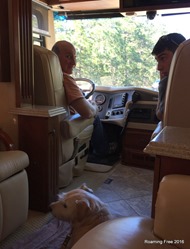 We arrived at Van’s house, and after meeting us at the end of his driveway, he directed Tom to pull into the covered workshop. 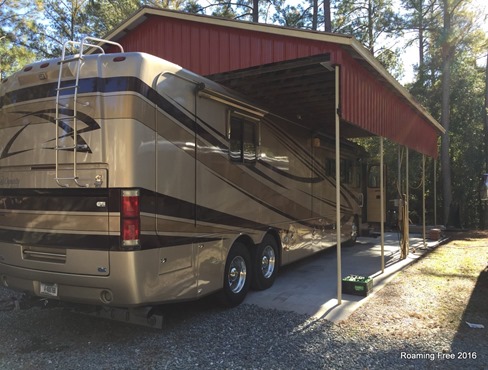 Van and Craig have made this modification to a couple dozen RVs this year, so they already had some of the parts made.  They just had to take some measurements under the chassis and make some brackets for mounting the watts link.  There was going to be some welding involved, too,

Craig showed Tom and Nicolas what needed to be done, 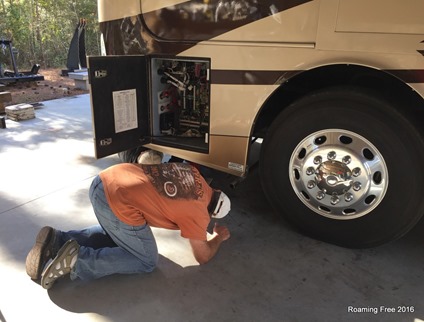 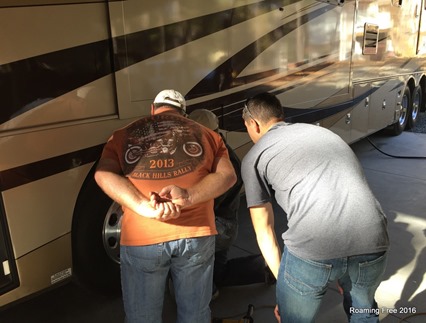 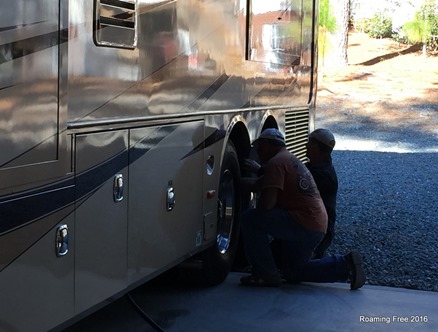 and then we just stayed out of the way while they worked. 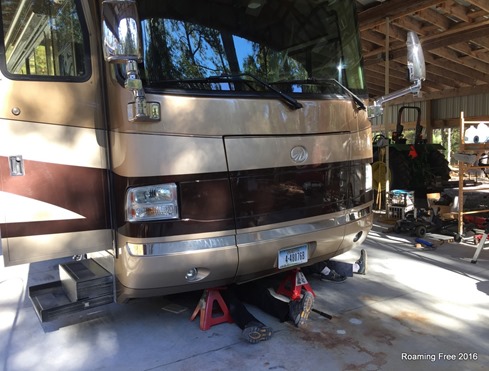 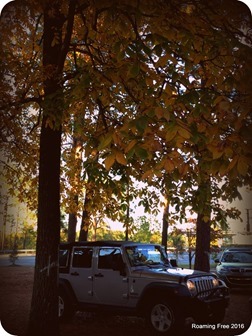 We found a church just down the road, so left for awhile to go to mass, and when we got back, they had all the parts ready to install.

Van had made the necessary brackets, and Craig was in the process of welding them in place.  We were in luck that they were no surprises in our installation, and the entire job went smoothly.  After about 4-1/2 hours, they were done, and even helped Tom with a couple of small maintenance projects, as well!

It was dark by then, so we spent the night comfortably under cover before heading out in the morning. 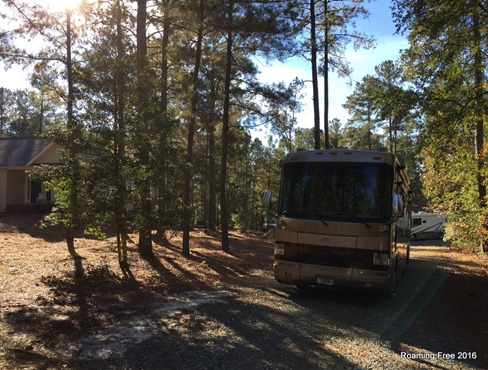 It was a quick trip for us, but should result in a big improvement in ride and ease of handling for Tom!  We’re really glad we met up with these guys, and are so grateful for the service they offer in developing this system for Monaco owners!