Wrapping up our stay at Santee NWR 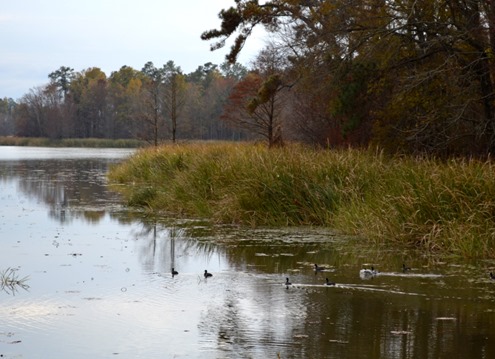 As we were wrapping up our stay here at the Refuge, talking to Garrett, I mentioned that I never made it to two of the four units within the Refuge, and hadn’t seen many ducks at all.  He said, “Well, we’re going to have to fix that before you leave – we’ll get you out in the field!”

Santee NWR is made up of four separate units – The Bluff Unit is where the Visitor Center, Indian Mound and our volunteer campsites are located, so I’ve been all around here; the Cuddo Unit is where the Wildlife Drive is, and we had driven around it several times since we’ve been here – although that drive is only a very small area of the unit. 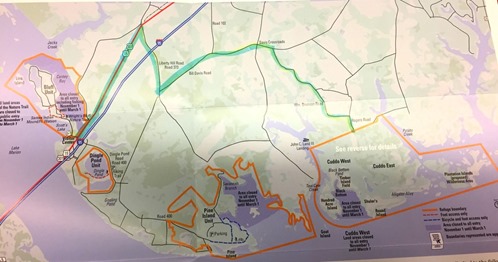 Pine Island is primarily a waterfowl impoundment area, although Marcie says there are some pretty big alligators out there, and Dingle Pond is a Carolina Bay – an elliptical depression in the ground, for which there is no explanation or known origin.

So, for my day in the field, we set out in the truck with me in the shotgun seat – Tom got demoted to the backseat for the day!  Our first destination was the Cuddo Unit – Garrett wanted to see if there were more ducks around now that temperatures up north had turned colder, and he had to check the hog traps.  We drove over by the impoundments first, and it looked pretty quiet when we got there. Garrett continued along the service drive, and started to flush some ducks out of their hiding places. 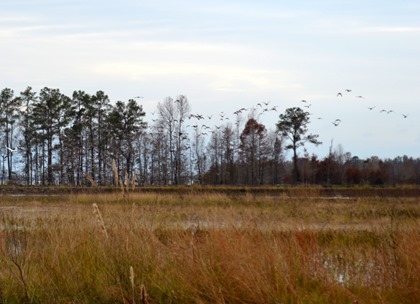 Then more – he was pointing out mallards, black ducks, teals, wooducks, 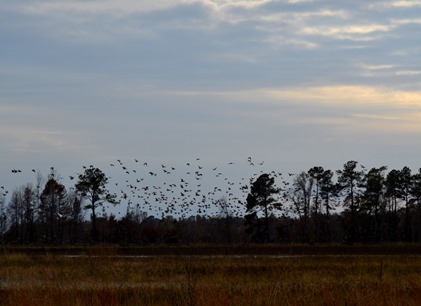 but they all look the same to me!  He was pointing out differences in how they fly, and size, and other clues he uses to identify them . . . but it would definitely take me a while to get the hang of it!

On a side note – on Jeopardy tonight there was a clue that included a picture of a duck where you had to know that it was the blue variety of a duck with another color in it’s name . . . I knew it was a blue-winged teal, and none of the contestants did! 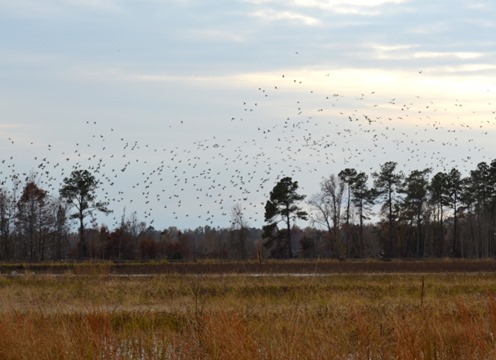 We watched the ducks for a minute longer, then left the area so they could settle back down.

We looked for hogs running through the woods, and although we saw evidence of them rooting through the ground, we didn’t see any hogs.  We exited the impoundment area, and continued along the wildlife drive.  When we arrived at Alligator Alley, we saw something we hadn’t seen on any of our previous drives – an alligator! 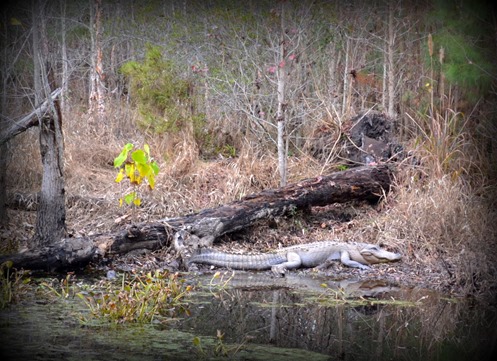 With our biologist tasks complete at Cuddo, we headed over to Pine Island to check water levels. 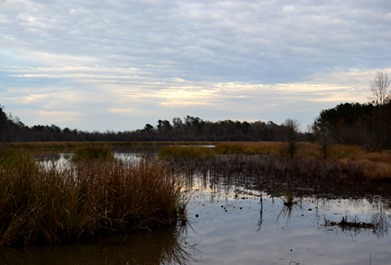 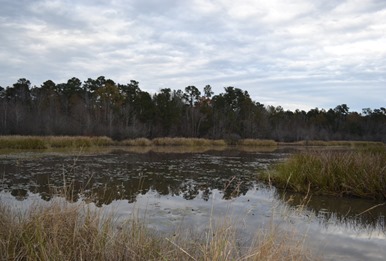 I spotted a Great Egret in the water, and a Great Blue Heron flew past the truck as we checked water levels. 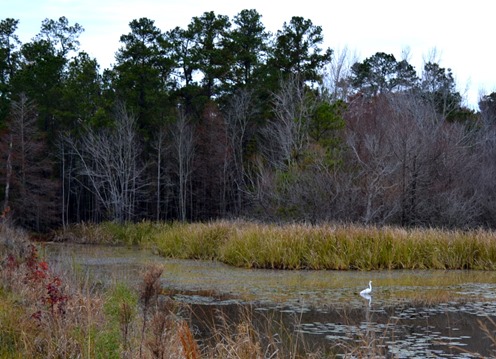 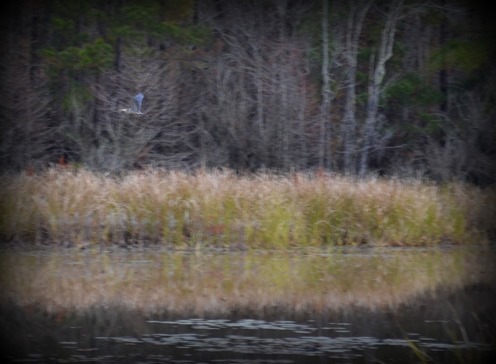 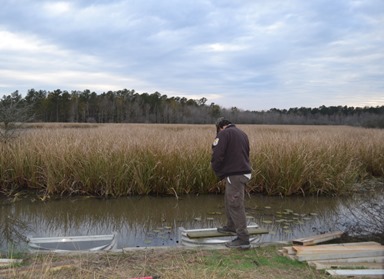 and that was about all that was happening at Pine Island.

As we drove around on our way out, we startled a Bald Eagle and it flew off in front of the truck, but I was too slow to get a picture.

We also passed by these duck nesting boxes that had been built by some scouts, but I can’t remember the kind of duck they are for (that’s about when the Bald Eagle flew up in front of us, so I was kindof distracted). 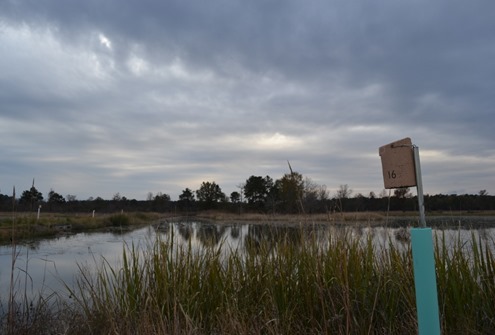 I’m not sure if Garrett was impressed by all my questions about ducks, or annoyed, but he kept answering them! 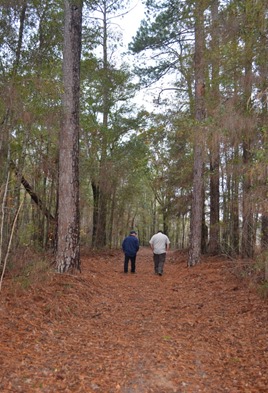 Our last stop of the day was the Dingle Pond Unit.  Garrett wasn’t familiar with the trail, so we opted to park the truck at the entrance and walk in. 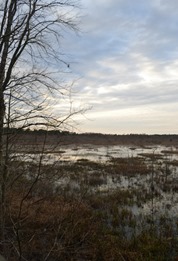 We stopped at the Observation Deck overlooking the water, and spotted more ducks. 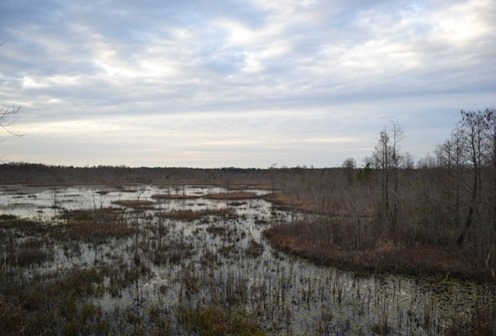 We were in an exploring mood, and it was a nice day, so we took a walk along the trail, and then around the Dingle Pond Boardwalk loop. 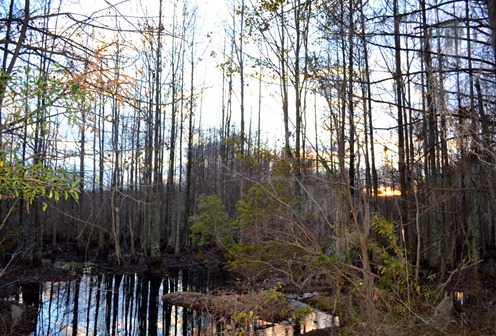 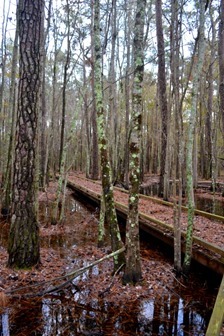 somebody needs to get out here and clear the leaves from the boardwalk, though . . . add that to the “To Do List”. 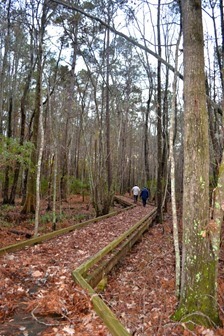 It was a nice day, and fun getting out in the field for a change . . . and now I’ve officially visited all four units of the refuge!

We really enjoyed our time spent at the refuge – this was our first experience volunteering in the national system, and it went really well.  The staff and volunteers at Santee are super nice, and we consider them friends.  If Nicolas stays in Charleston, or comes back to Charleston at some point, we would definitely come back here again.

As a bonus, in exchange for our hours of volunteering, we received a free National Park annual pass – great deal! 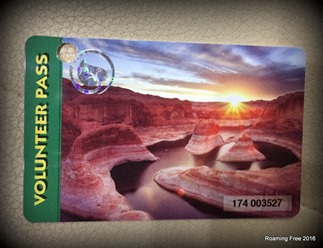 Yesterday we said our good-byes, and after getting most of our stuff packed up and cleaned up, we drove down to Charleston to take Nicolas out to dinner one more time.  Being close to Nicolas was our favorite thing about spending these three months in South Carolina, and even though we had to say good-bye for now, it won’t be for long.  We’ll be back through in the Spring!

Ready to hit the road! 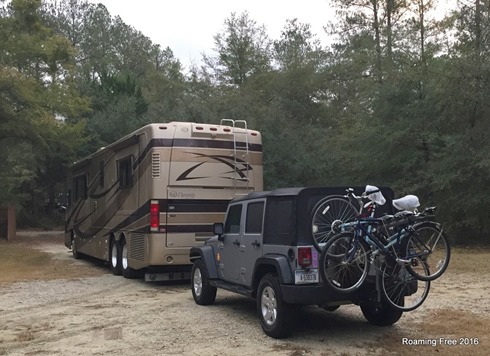