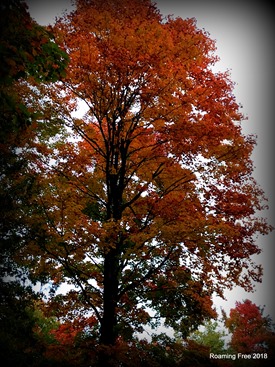 After a week of rainy, chilly days, we finally had a stretch of very pleasant, even warm & humid, fall days.  We enjoyed the sunshine, got Casey outside for lots of walks, and even had a campfire with our neighbors one evening.

The combination of the rain, sunshine and warmer temperatures really made the colors pop in the trees all around us! 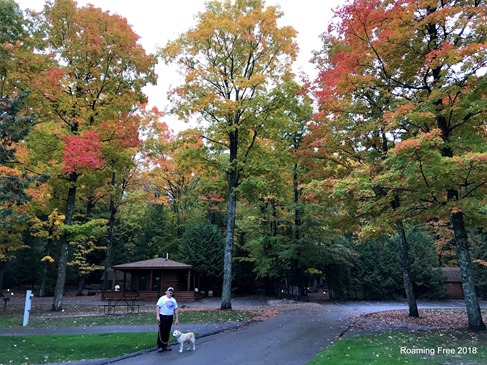 Tuesday was supposed to be the nicest day of the week, so once I was done with work I picked Tom up form the Habitat job site and we headed over to Lake Michigan.  It was a beautiful day for a drive,and I on the hunt for Petoskey stones! 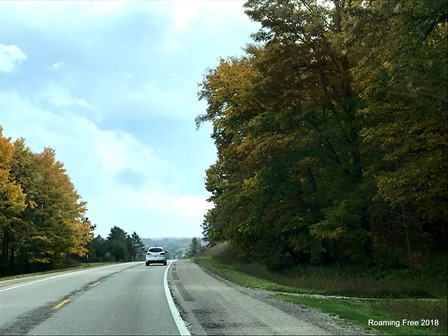 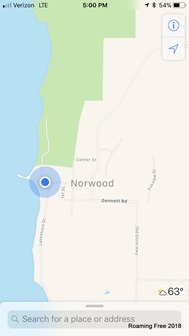 When I was young, my family used to camp in this area every summer, and one of our favorite places for Petoskey stone hunting was the Lake Michigan Beach near the town of Norwood.  Much of that lakefront area is contained in Fisherman’s Island State Park (which is also a great place for finding Petoskey stones), but our destination was the area south of the state park.  Driving towards the lake, the road ends at a little township park with a small parking lot.  From the parking lot, there’s a short trail to the beach. 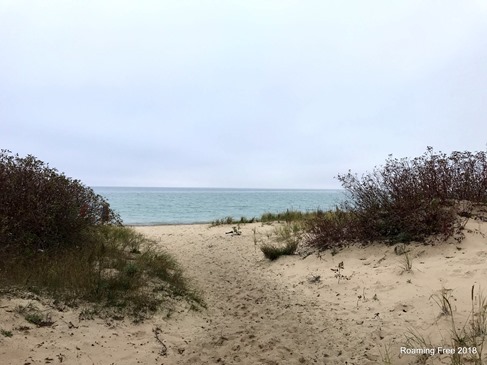 By the time we got there, clouds were starting to roll in, but I was determined do some hunting.  There were a few others with the same idea. 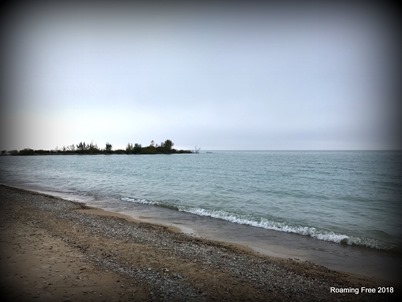 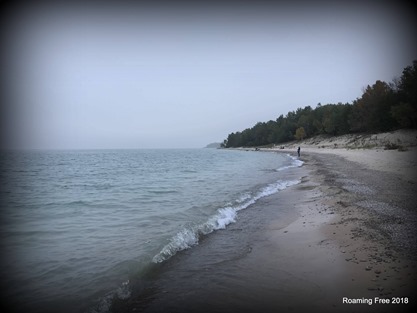 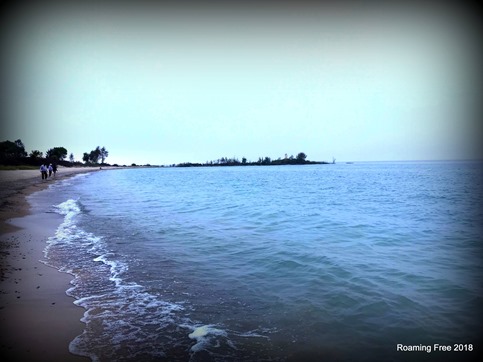 I walked the shoreline, but since I couldn’t go much past my ankles (the water was pretty chilly!), I didn’t find as many stones as I’d hoped for.  I did find some, though, so it wasn’t a total loss.

On our way back to Petoskey, we stopped in the little town of Charlevoix for dinner, with a walk along the waterfront.

Just a few boats still in the water at this time of year . . . 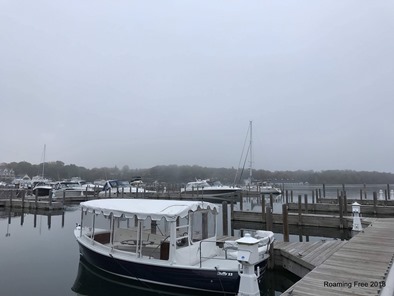 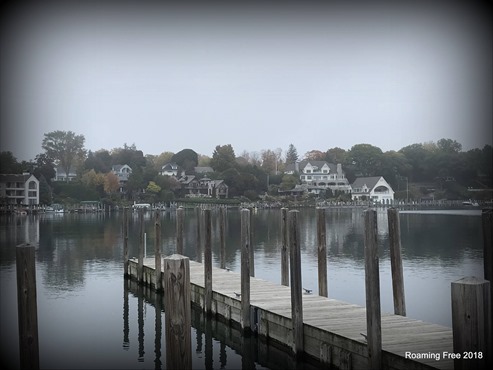 We could see the lake beginning to be overtaken by fog, and by the time we finished dinner we couldn’t see the lake at all anymore.

On Saturday, we were back in Charlevoix for the Apple Festival. 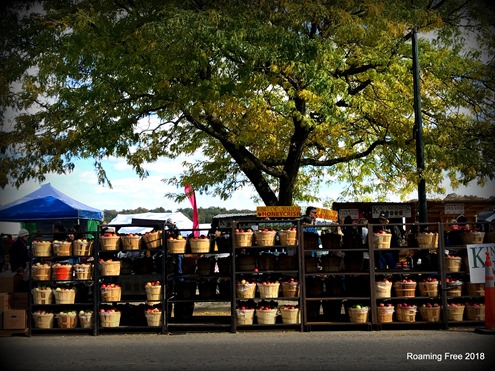 It was a cool, crisp fall day, but the sun was shining and it was great day to be outside.  We walked through the craft booths, many of which we had seen at previous craft fairs, and then we walked though the apple orchard vendors.

There were several orchards there, but I was in search of the one that had SweetTango apples – they’re my current favorite, and the kids like them too.  We found them finally, at the last orchard booth we came to, and I bought a half bushel to take home with us.  I also picked up a half peck of Northern Spy - our favorite pie apple.  I think an apple pie is in our future! 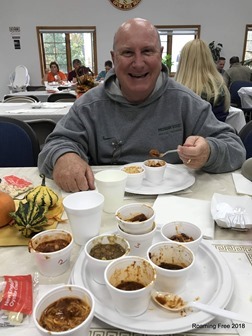 As we walked around the craft booths, we saw a sign for a chili cookoff lunch at the local Methodist Church.  Chili sounded pretty good for lunch, so when we were finished shopping, we walked over to the church for lunch.

The chilis were all made by local restaurants, and several of them were really good. 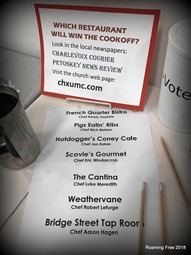 After lunch we walked up a side street and came across an area that a local farm had set up for the kids – there were all kinds of farm animals, and the kids were able to feed them carrots and grains. 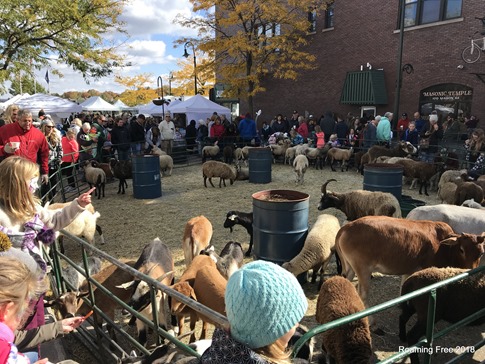 It was a very popular area, and the kids were having fun feeding the animals. 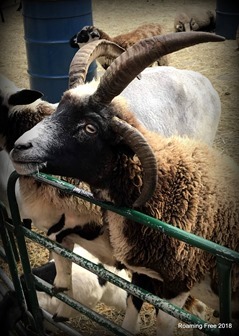 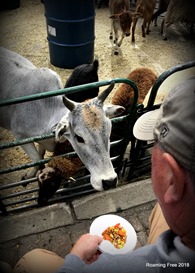 It really was a beautiful day . . . no fog over the lake today! 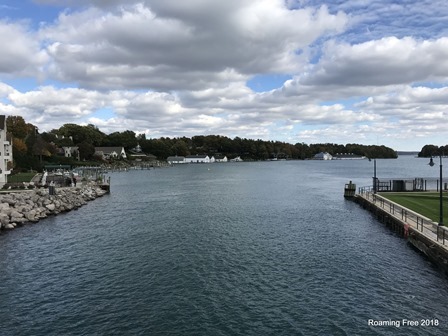 Before leaving town, we took a walk along the channel to take a look at Lake Michigan at the city beach. 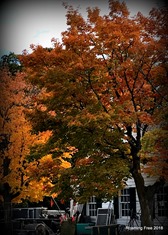 Pretty trees along the channel, 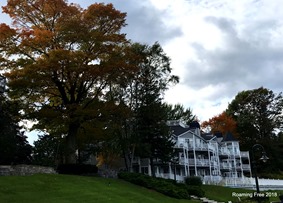 and a look at the lake. 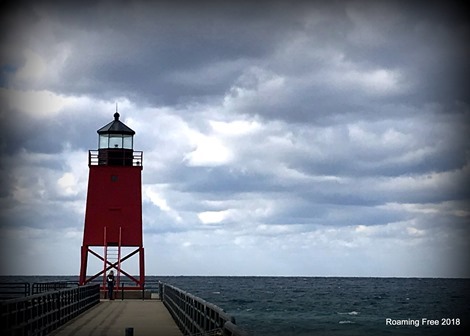 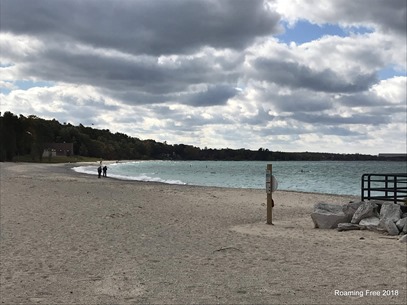 Too chilly for Petoskey stone hunting, though!