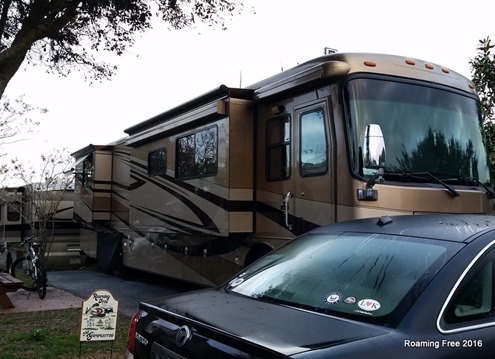 Back in the summer, when we were still researching motorhomes, Tom found a Monaco Owners Group in Yahoo Groups.  After we put a deposit on our ‘06 Dynasty, Tom joined the group so he could start asking questions and get some advice on our upcoming purchase.

He got lots of good advice from several group members, including a really good checklist of things to inspect when purchasing a used motorhome.

Once we made our purchase, he continued to communicate via the forum – asking questions about the various systems thatare new to us.  Through the forum conversations, we heard about the 2015 Monaco Gathering that was happening at Lazydays during the first week of February.  It sounded like a good way to learn about our new coach and make some contacts with other Monaco owners, so we signed up.

We arrived at Lazydays on Tuesday, and got set up on site 291.  There were a total of 66 RVs signed up for the rally, and most were arriving on Tuesday.  It was a zoo around there, but the staff at Lazydays were pretty organized and got everybody checked in without issue.

The Gathering included seminars on Wednesday through Friday, 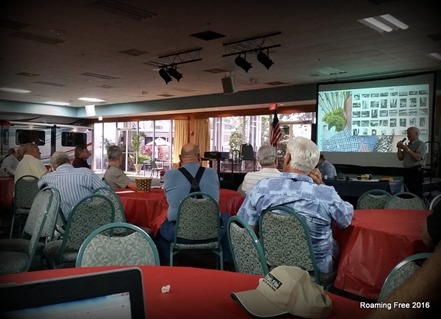 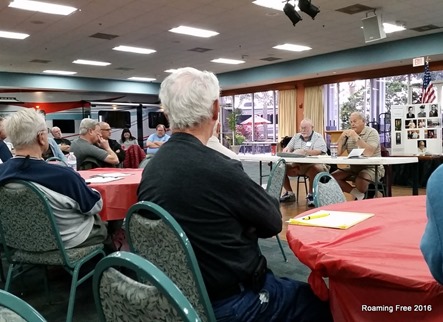 where most of the men – and a few of the women – learned about maintaining their engines, transmissions, suspension, awnings, slides, tires.  There was a lot of really good information being shared!

We also saw a presentation on RV’ing to Alaska, and another on cooking in the convection microwave. 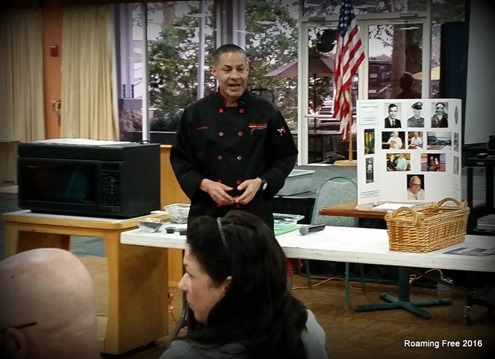 In addition to teaching us about cooking in the convection microwave, the Chef was responsible for providing delicious buffet dinners each night – BBQ, Italian, Latin, Turkey and Roast Beef.  Nobody went home hungry in the evenings!

In addition to the seminars and dinners, we had an opportunity to have the motorhome weighed – we’re within our recommended values on all axles

-- and we had our steering gear checked and adjusted, removing some of the “slop” that had been in the steering.

We met some really nice people, and made a lot of great contacts – we’re really glad we attended!

On Saturday afternoon, once all the presentations were finished, we took a drive to Parkesdale Market in Plant City with our friends, Lynn & Dave, to enjoy some yummy strawberry shortcake.  They had never been there before, so they had to try it! 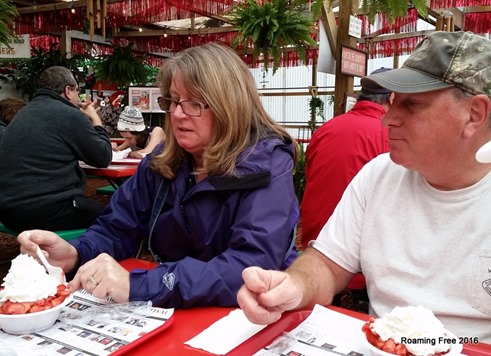 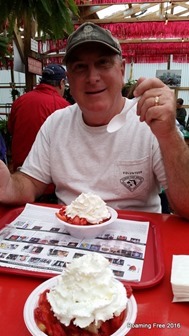 Bryce didn’t go with us, because the Michigan State basketball game was on – I guess basketball has more appeal than strawberry shortcake! I was going to bring him a strawberry shake, but the line had grown to a ridiculous length by the time we were leaving!!

No shake for Bryce, but I did bring home some good-looking strawberries! 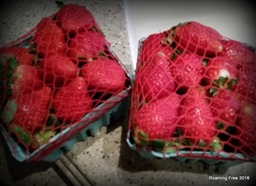 It was a really good week!