Venturing out on the dunes 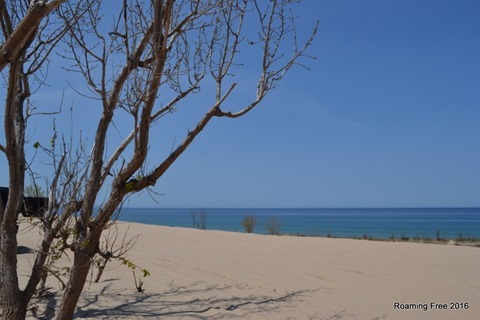 It wasn’t all work this past week . . . we had a couple of hours free on Saturday, so Bryce aired down the tires on the Jeep, took the roof off, attached the safety flag, and we headed over to the ORV Area.

Considering it isn’t even summer yet, we were pretty surprised to see how crowded the staging area was. 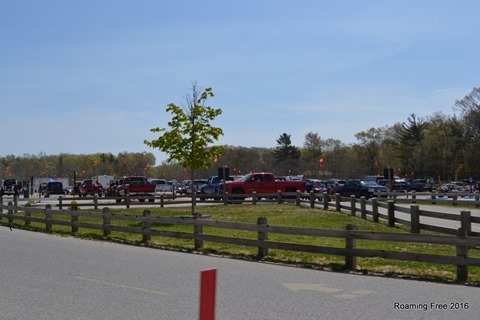 As we waited in line to get through the inspection point, 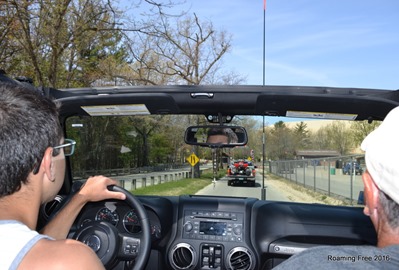 we were checking out all the toys parked in the staging area.  This guy has “BRKTHBK” (Broke the Bank) on one of his license plates . . . I don’t think he was kidding! 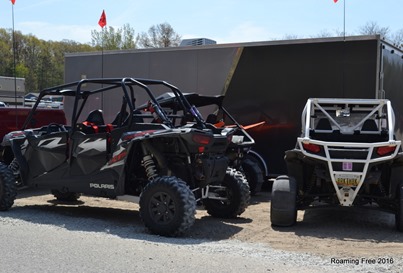 We finally got through the inspection point where they checked our flag, our stickers, and made sure everybody had a seat belt on . . . then we were on the access road to the ORV Area. 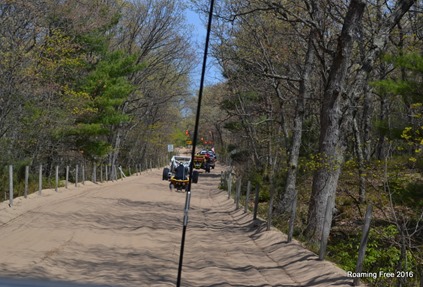 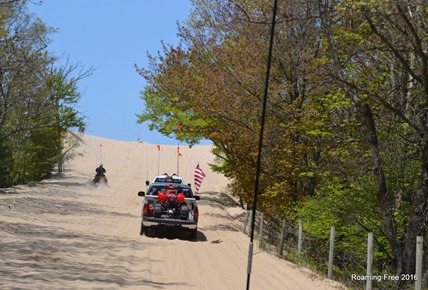 We climbed the hill, 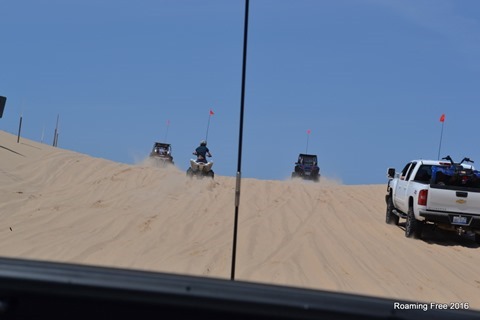 and found a spot to pull in at the base of “Test Hill”. 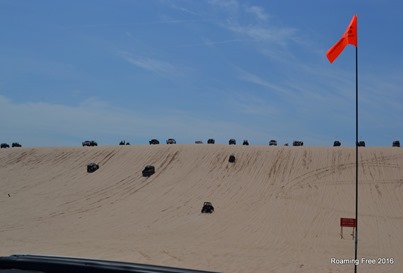 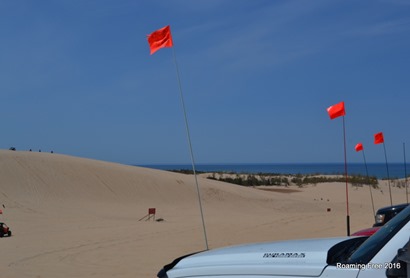 On busy days like this, half the fun is watching people’s attempts at climbing the steep incline of Test Hill! 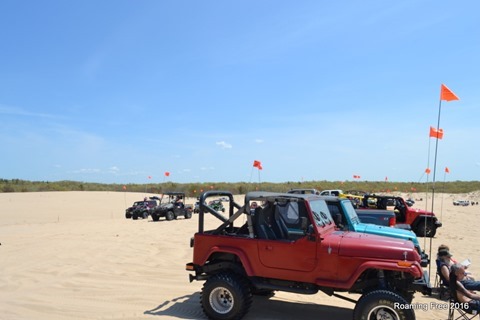 We watched a guy in a Jeep make a half dozen attempts to get up the hill, backing down each time (because you can’t turn around on Test Hill), until he finally made it over the crest – barely!

Sometimes it’s the older, rougher-looking vehicles that have the easiest time!  This guy didn’t have any trouble at all. 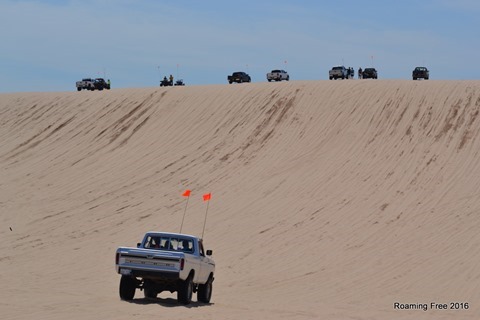 It was probably operator error (there’s a LOT of that going on!), but this new truck buried his rear axle just below the crest, and had to be pulled the rest of the way! 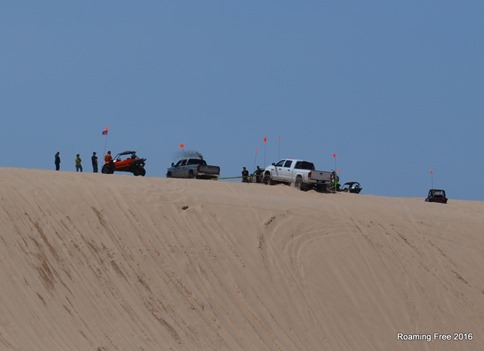 Test Hill, and the subsequent hills beyond it are “one-way”, but past that, closer to the lake, traffic can go in any direction.  That’s where it gets really crazy, especially on a Saturday!  We drove towards the lake, constantly watching in every direction in case somebody on a 4-wheeler or dirt bike came flying over a hill in our direction.

We made it through without incident, made our way around the standing water (which was deeper than it looked!), and parked at the beach. 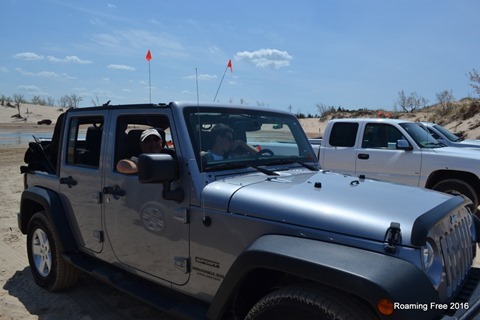 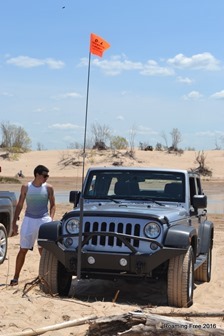 Bryce and Tom got out to make sure the underneath of the Jeep wasn’t packed with sand (it wasn’t!), and I walked down to put my toes in the water . . . it was COLD!!  According to the local news, the water temperature is still in the mid-40s.  BRRRR!!! 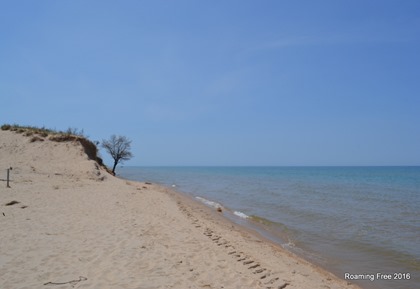 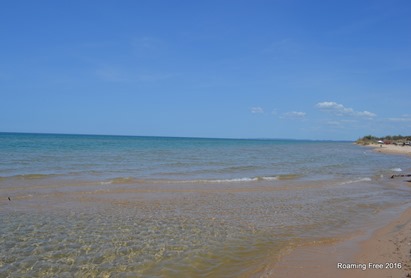 While we were at the beach, we watched a guy in a lifted Cherokee driving through the water . . . he was having fun! 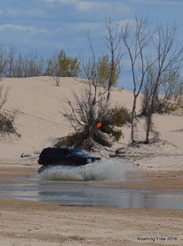 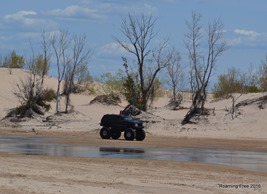 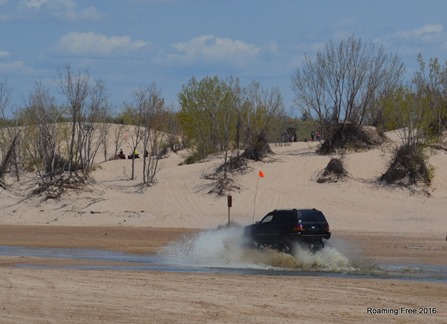 On our way out, Bryce decided to attempt some of the less extreme hills – Tom was nervous, but up and over we went! 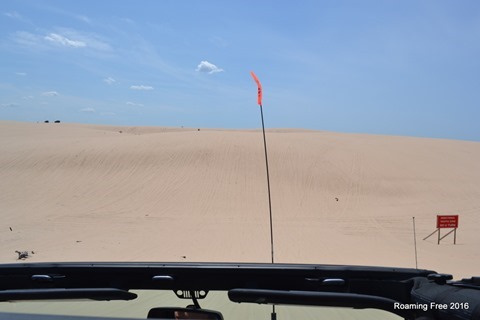 It was fun, but we’ll probably stick to weekdays from now on . . . and out we go! 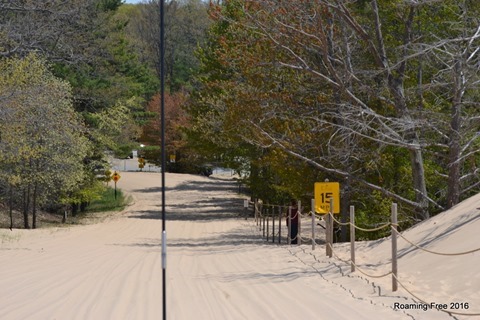