For the last couple of weeks, we have been shopping for all the things Bryce will need at college – including winter clothes, which he hasn’t had in a while!  We’ve slowly been accumulating and packing . . . and my precious floor space has been taken over by boxes!  They were everywhere – my bedroom floor, the dash, the front seats!

Finally, the day came to move everything to the Jeep! 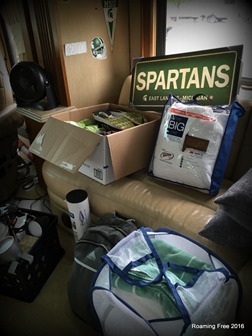 Bryce packed it up . . . with room to spare, and still a place for each of us to sit for the ride to East Lansing!  Last step was to put his bike on the back of the Jeep . . . and he was ready to go! 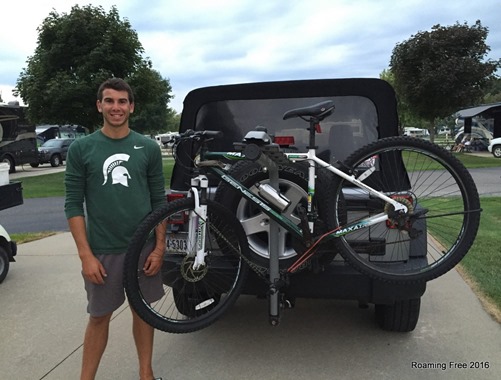 I told him he looked way too happy to be leaving me!!

With over 9000 freshman moving into the dorms on a single day, they have it down to a science!  We were assigned a 1-1/2 hour window for check-in, during which we would be allowed 20 minutes of parking on the sidewalk in front of his building.  Our assigned check-in time was 8am – 9:30, so that meant an early start for us on Sunday morning!  We left the park at 7am, and arrived on campus just a few minutes after 9am. 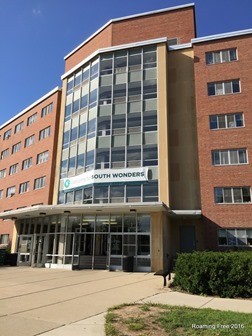 (OK, I didn’t think to take a picture when we arrived, so this one was taken at we were leaving at the end of the day – the commotion had died down considerably!)

We arrived and were directed to back into a spot along the sidewalk.  Bryce and I went inside to check in, and several older students brought carts to the Jeep for Tom to start unloading Bryce’s stuff.

He locked up his bike outside (but also got a key to the “bike room” for his floor, where he’ll be able to store his bike during bad weather). 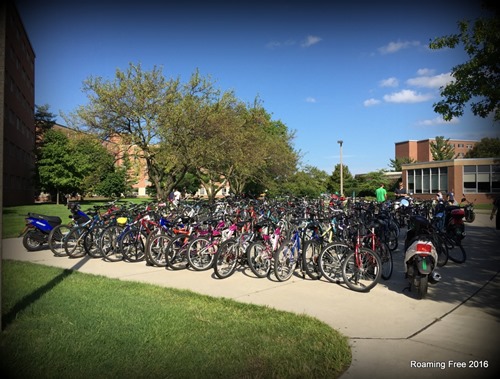 His stuff fit into 2 carts (which wasn’t bad at all, compared to what I saw some people wheeling inside!!), and luckily he’s on the 1st floor so we didn’t have to wait in the LONG line for the elevator!  Once we had his stuff in his room, Tom went to move the Jeep and Bryce returned the carts to the lobby.

We had taken the easy route and pre-ordered a futon, refrigerator and microwave online, to be delivered directly to the room.  His roommate had moved in the day before, so his family had taken care of lofting the 2nd bed, moving furniture around so they could roll the carpet out, and putting the futon together.  All we had to do was put Bryce’s stuff away and set up the WIFI for them.  Theirs is one of the few dorms that has not yet been equipped with wireless in the rooms, so we brought a router and set up their WIFI in their room.

The rooms are small, but I guess it’s OK for a couple of guys! 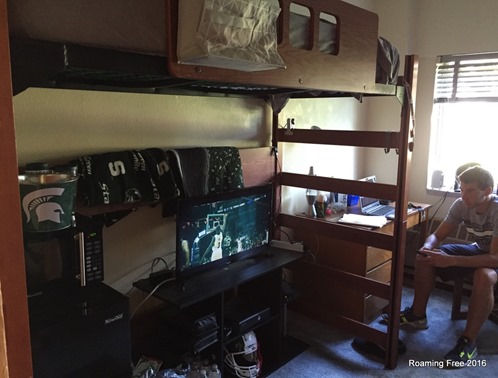 They have everything they need – bed, desk, frig, microwave, XBox and TV!! 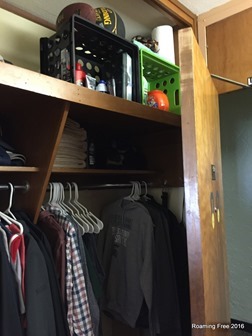 They have a dresser to share, and each a small amount of closet space . . . good thing Bryce is tall – I couldn’t reach anything on that shelf!

The bathroom is small and shared between Bryce, his roommate, and the 2 guys in the room next door, but I guess it’s big enough for them! 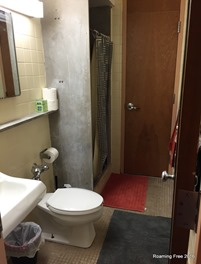 We met several of his neighbors and their parents, and everybody was really nice.  We also met his Resident Assistant (RA) for his floor who, it turned out, lives here in Silver Lake and knows many of the guys Bryce works with at the Wave Club, as well as the owner.  Small world!

Tom was happy to relax! 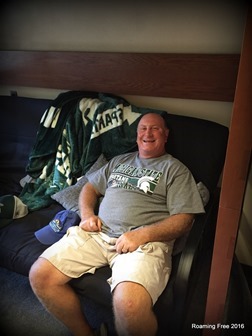 With everything unpacked and put away, we went to the dining hall for lunch (pretty good food), and then made one more Walmart run to pick up a few last minute things that he needed.

On the way back, we stopped at the bookstore to check prices on his books – YIKES!  We’re still doing some research on online prices.

We finished up in his room, checked out the laundry facility and located the trash room, and by then it was almost 5pm.  It had been a long day for us, and Bryce still needed to get some dinner before his mandatory dorm meeting at 7:30.

We said our good-byes . . . and reminded him to make good choices, stay safe, and call home!!  I’m going to miss having my Binky around!!  We’re going to pick him up for one more weekend, after he settles in for a while, and take him back to see the family before we head south for the winter.  Hopefully by then we’ll be able to find a winter coat and boots! 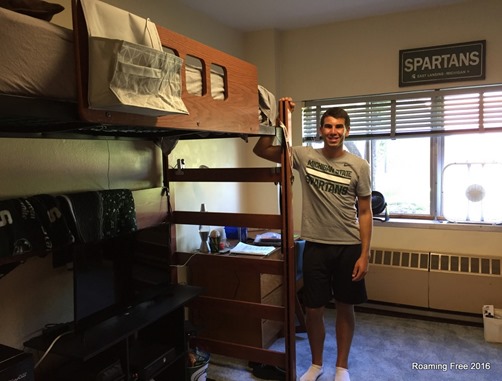 He’s happy, though, and ready for this new adventure!  Good Luck, Bryce!