Biking and birding in Mission, TX 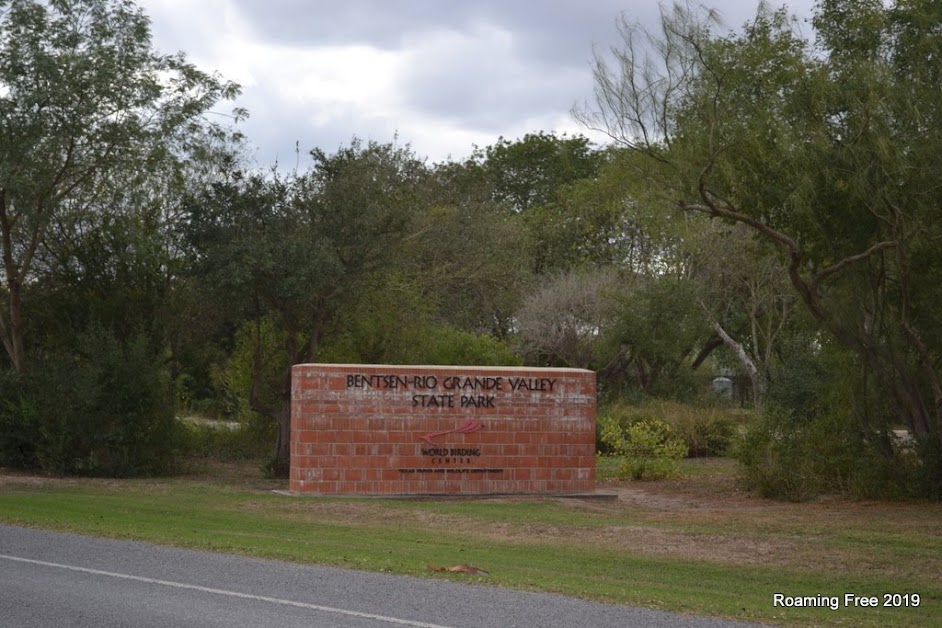 We’ve been wanting to get the bikes out for a longer ride, and I had read online that the Bentsen - Rio Grande Valley State Park was a favorite biking location in the area, and also part of the World Birding Center.

We’re not true “birders” but we do know how to identify some of the more popular birds, and it was a great day to get out on the bikes.  Plus, we’ve been wanting to check out the Mission and McAllen areas, so we loaded up the bikes and headed out.

The park is south of Mission, bordering the Rio Grande River, and is right next to two very popular RV Resorts – Bentsen Palms and Retama Village.  The parking lot is actually outside the park, and there’s no personal vehicle traffic allowed in the park at all.

We rode our bikes over to the Visitor Center to pay our $5/person entry fee and get our wristbands.  For people who don’t want to ride bikes or walk through the park, there is a tram that will take you around the park, and there are tram stops at each of the trails within the park.

From the Visitor Center, we showed our wristbands and proceeded into the park.  Our first stop was the Kingfisher Overlook along the La Parida Banco, which is a small lake that was formed when the Rio Grande River changed course and left behind this small area of the former river. 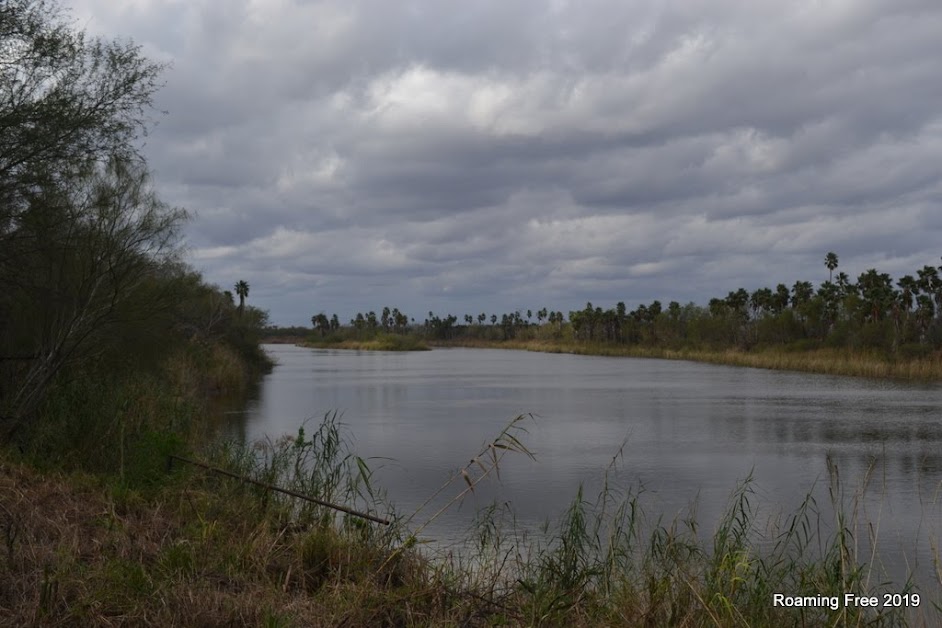 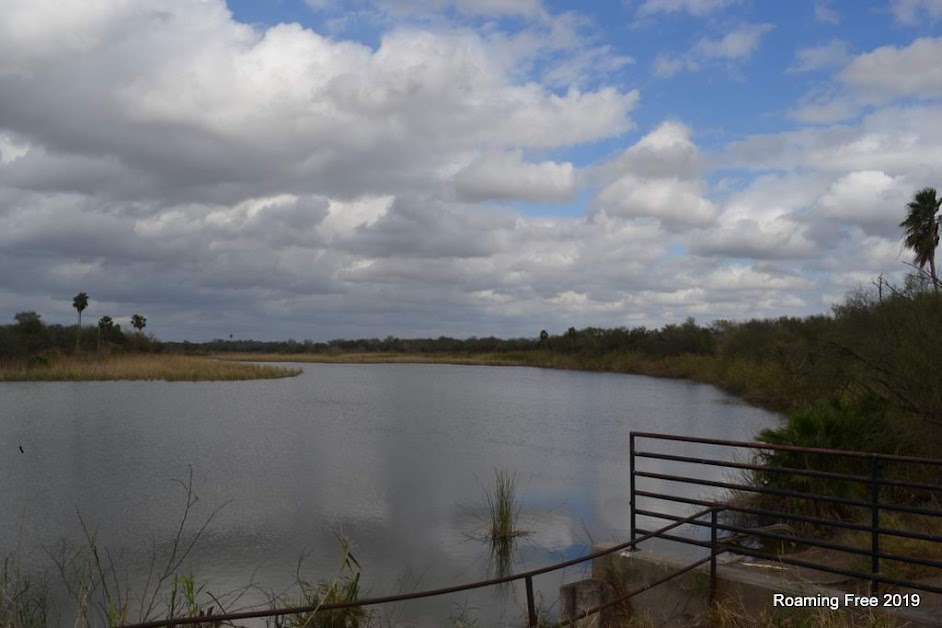 It was a beautiful view, but we did not see any Kingfishers or other water birds.

We continued along the waterway, and stopped at the Green Jay Blind. 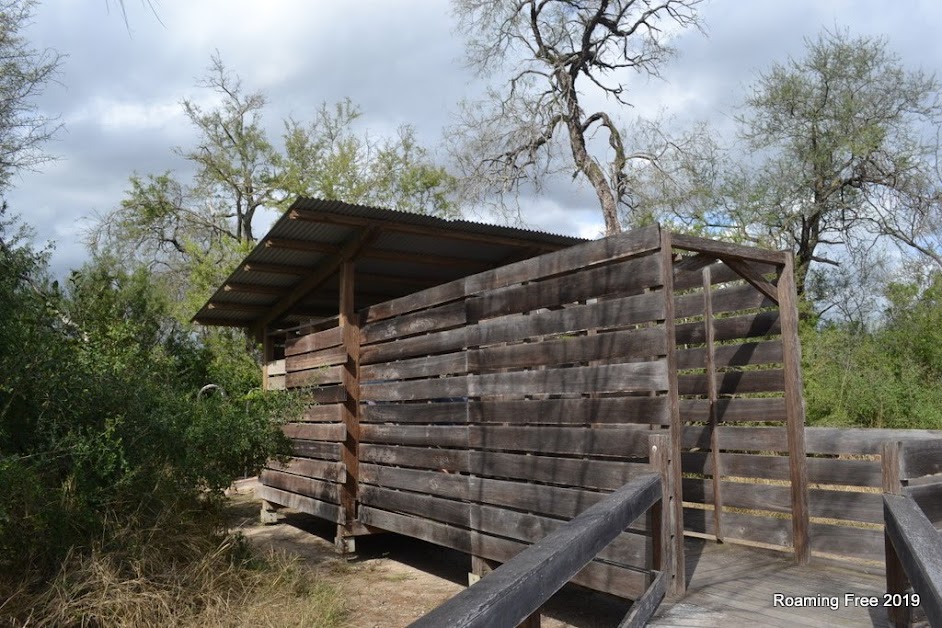 This was a pretty cool structure – there were benches inside, and any of the horizontal boards could be tipped down to give you a view of the feeder area where the Jays like to hang out.

While we were there watching, there were about 6 cardinals and several Green Jays going back and forth between the feeders and the trees, 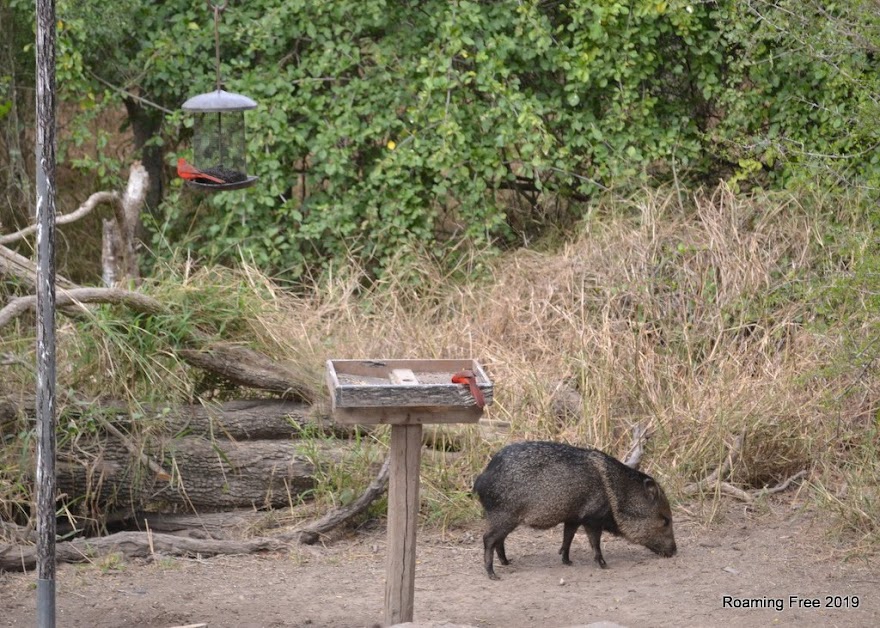 and a javalina hanging out to catch all the feed that got knocked onto the ground.

This is the closest we’ve ever seen one! 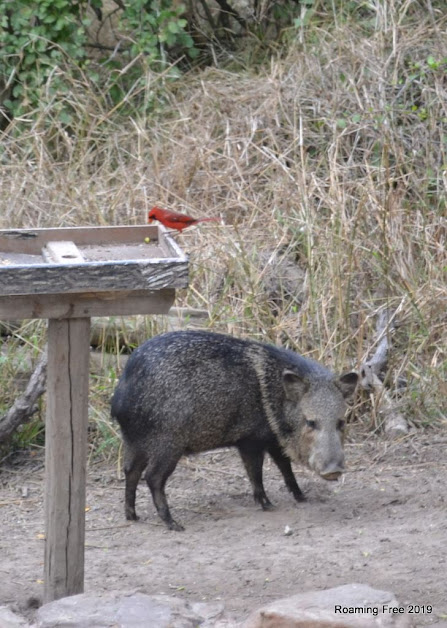 There’s the Green Jay on the feeder, 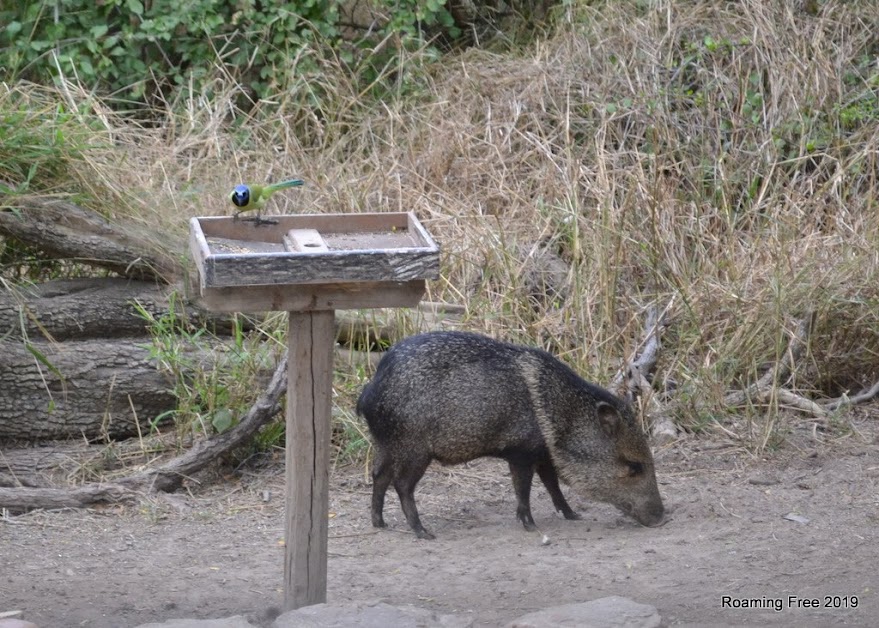 and two Cardinals on the other feeder.  We stayed and watched them all for several minutes, before continuing on around the park. 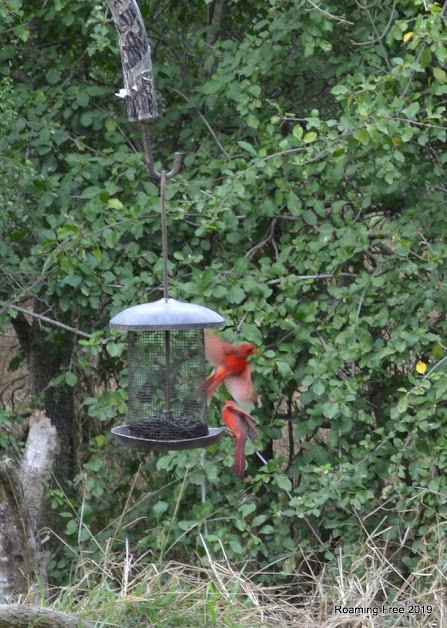 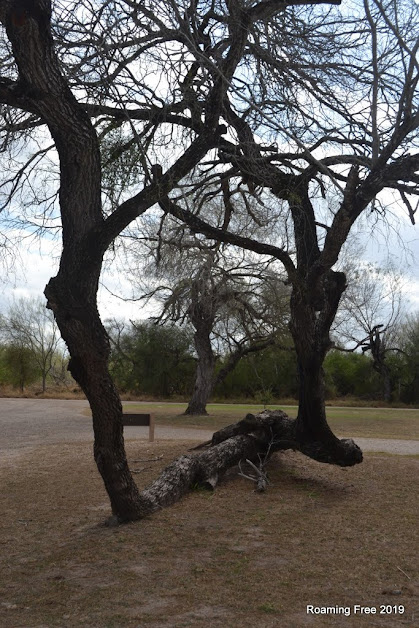 We continued along Mesquite Road – keeping our eyes open for birds, and javalinas!

We reached the next trail, the Rio Grande Trail, which was about 2 miles long.  It was listed as hiking only, but wheelchair accessible, so we figured it would be perfect for the bikes.

We were right – it was a nice wide trail, and the surface was finely crushed gravel – perfect for the bikes, and with enough twists and turns to keep it interesting.

We thought we were going to see the river, but apparently the trail only takes you to where the river used to be, when it was wider and deeper.

There’s a survey marker that used to mark the edge of the Rio Grande River, and a twin marker exists on the Mexico side of the river – the center line of these two markers indicates the boundary between the two countries. 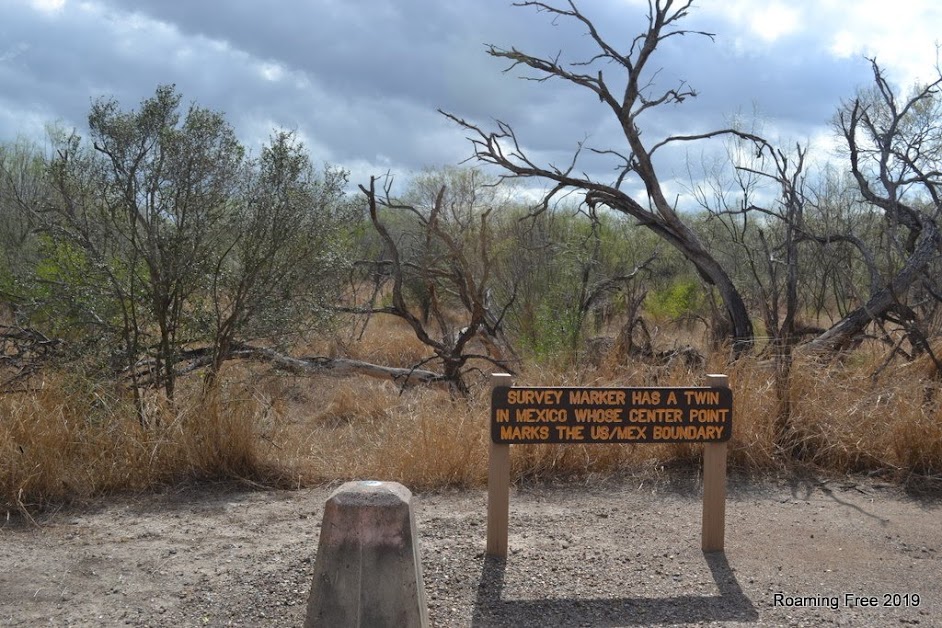 Back at the main road, we took the spur trail to the Hawk Tower.  It was a short trail into a tallgrass area, 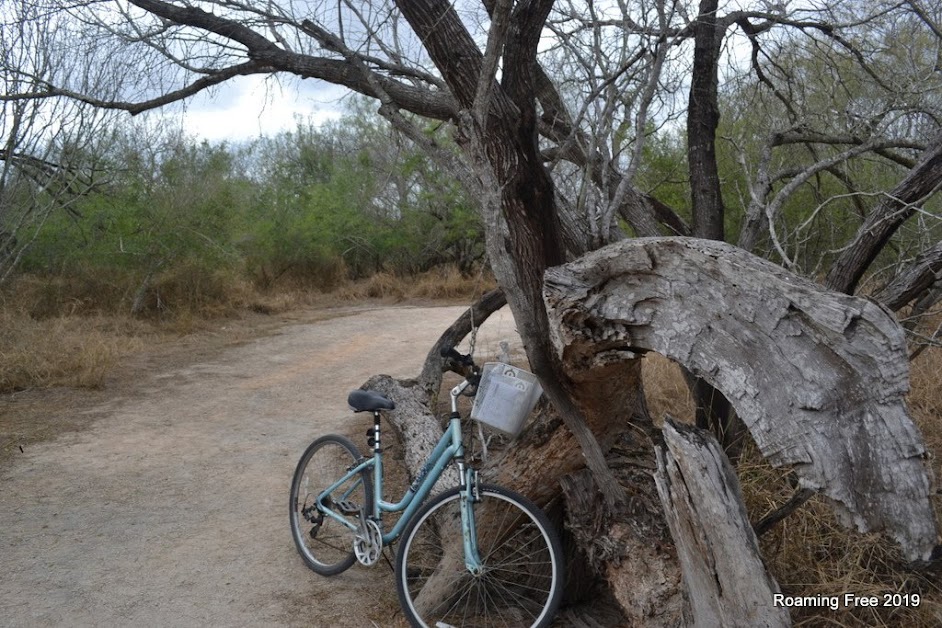 leading us to a boardwalk in the grass that took us up to a raised observation tower. 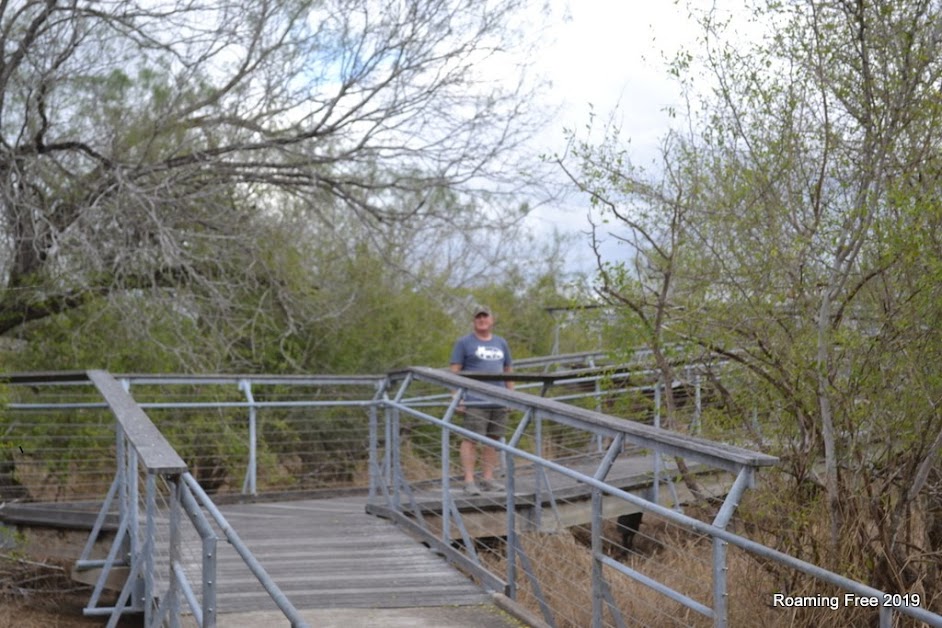 There were a couple of women there looking for hawks.  They had one zeroed in on their spotting scope, but I think it looked more like a Osprey than a hawk (maybe I’m the real birder!! lol). 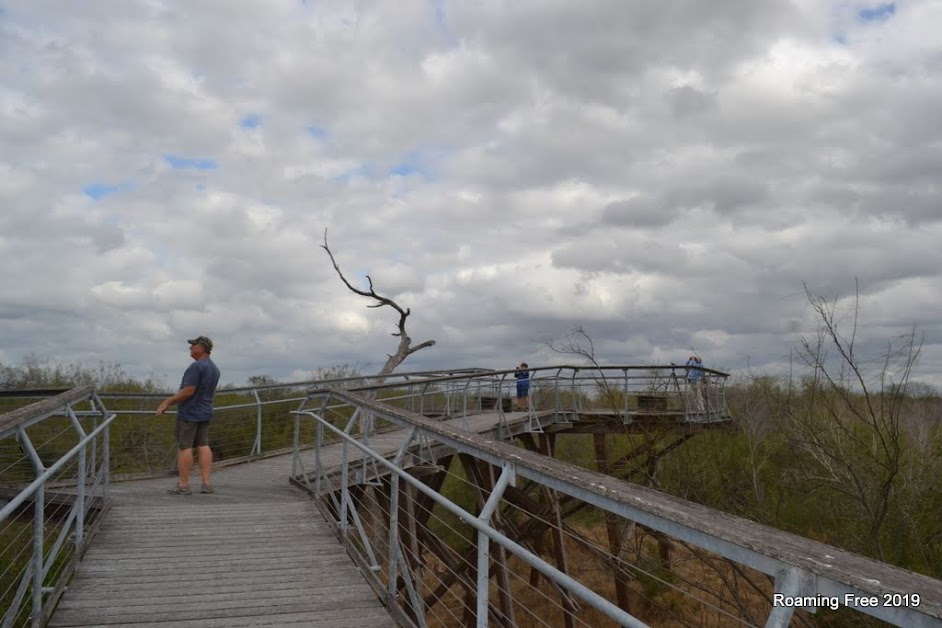 Back on the road, we spotted some type of hawk up high in a dead tree. 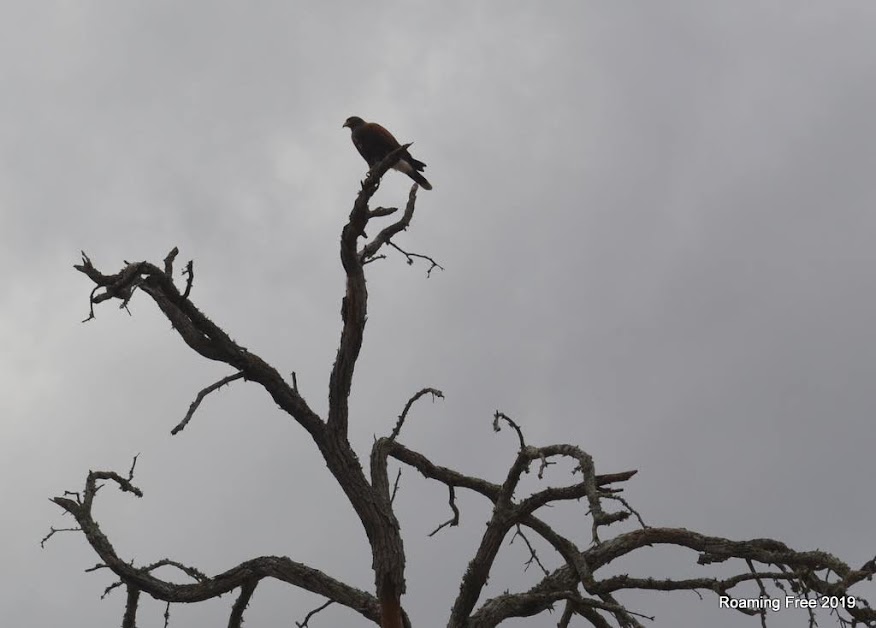 We watched it for a while, 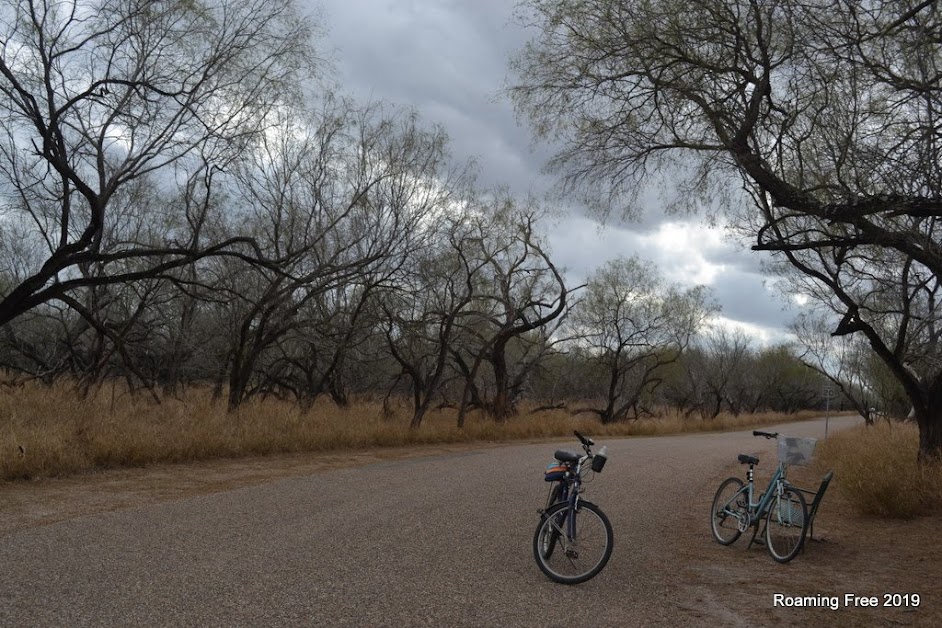 and we were going to ask the tram driver what kind of hawk it was, but as the tram got close, the hawk flew off. 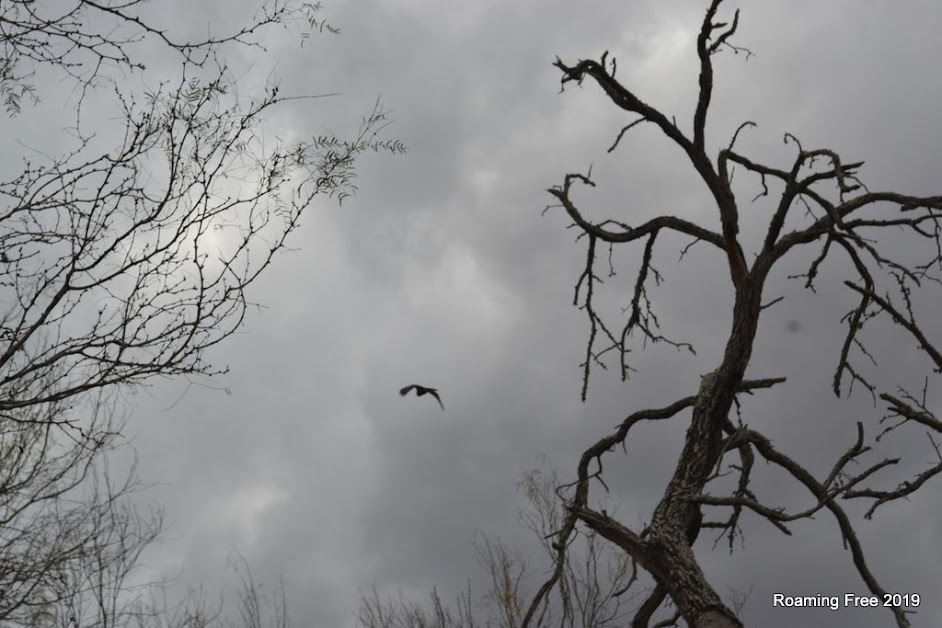 As that tram driver went by, I got a quick look at him, and I thought he looked like somebody we had volunteered with in Florida several years ago.  Tom didn’t see him, and just thought I was crazy.

We continued our ride around the park, stopping at the picnic area to have some snacks we had brought with us, and then went back to ride through the inner loop.  There was another bird blind in the inner loop, but no activity at it. 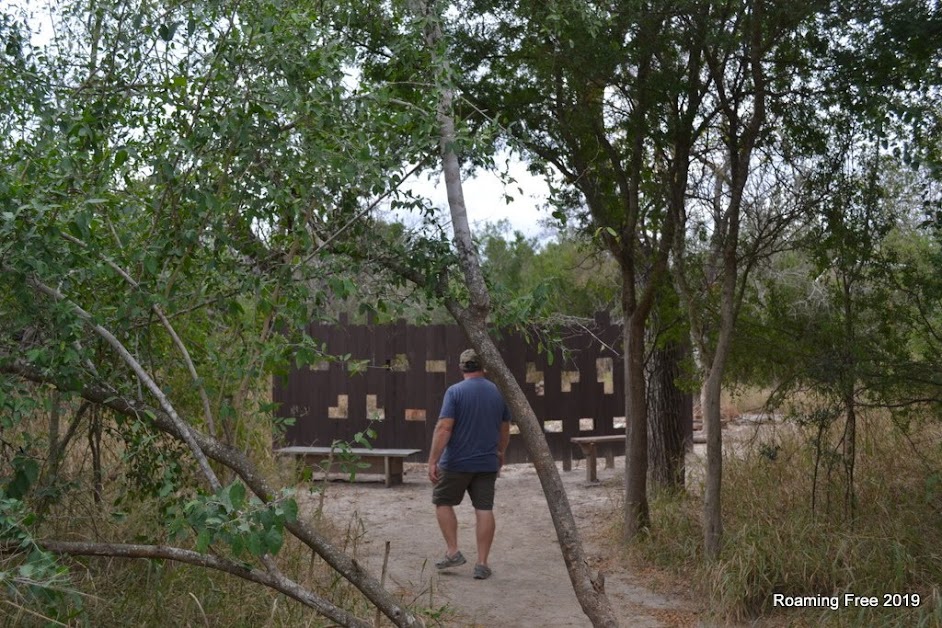 We did see a few Chachalacas at a feeder near the picnic area.  I only got a picture of one of them, though, the rest scattered when we stopped. 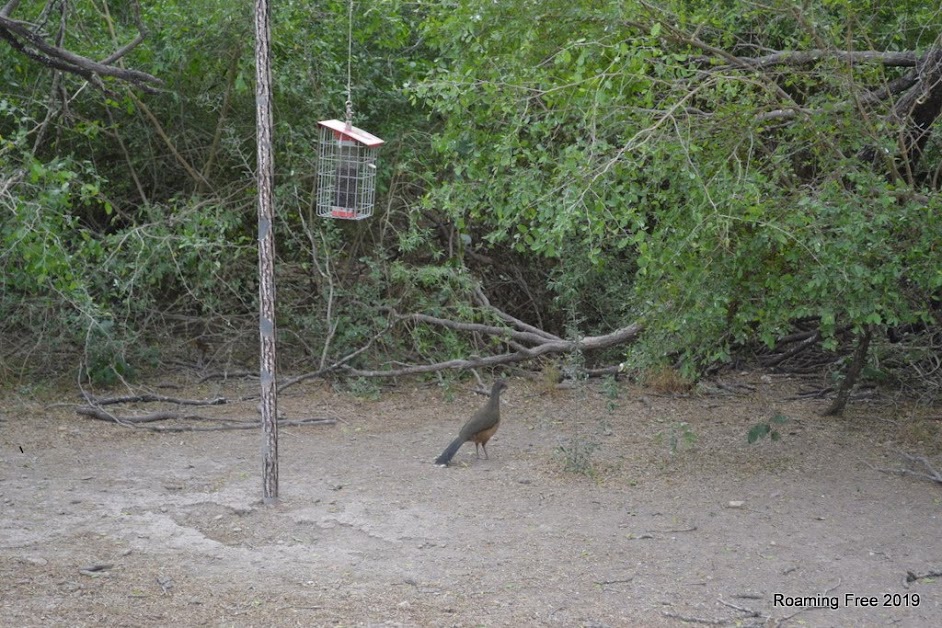 Back at the entrance station, Tom asked the volunteer if she knew the guy driving the tram, but she didn’t.  As we were standing there talking to her, though, he drove up, and it turned out I was right – he did volunteer with us at Camp Helen in Florida back in July of 2015!  Small world . . . and his name is Mike.

We all chatted for a few minutes, and I got some pictures of the birds at the feeders there by the entrance station.  The volunteer had just refilled the food, so there was lots of activity!

There were Green Jays, 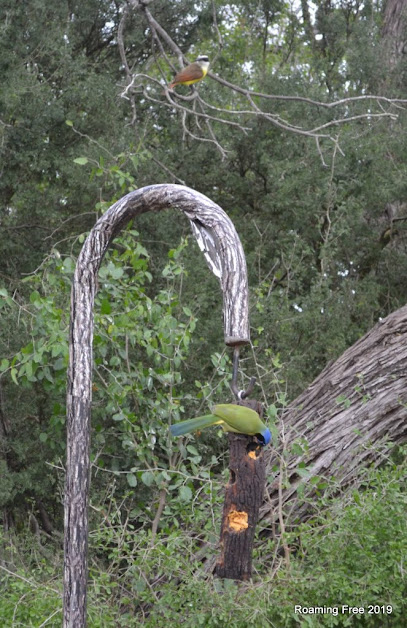 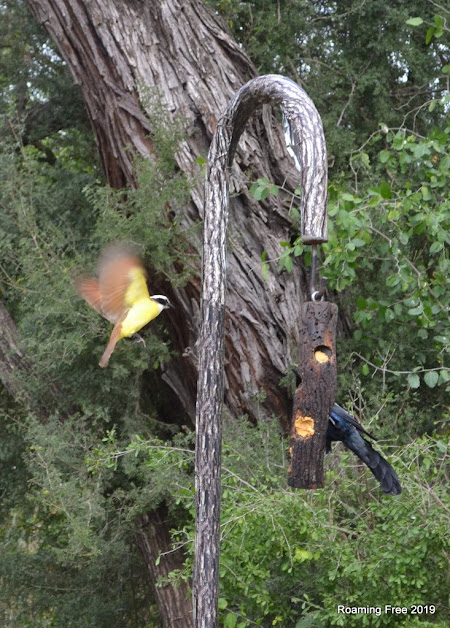 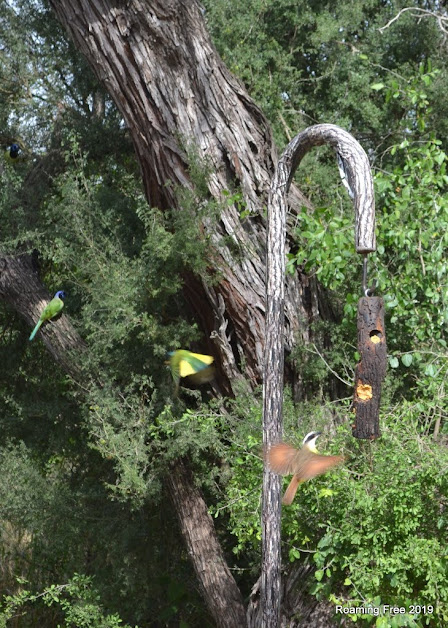 We were fascinated watching as the birds flew all around the feeders and the surrounding trees.  It was really cool when I could catch them in action and get a picture of the hovering near the feeder, with their wings flapping.

There were also Cardinals ( I thing these are both Cardinals), 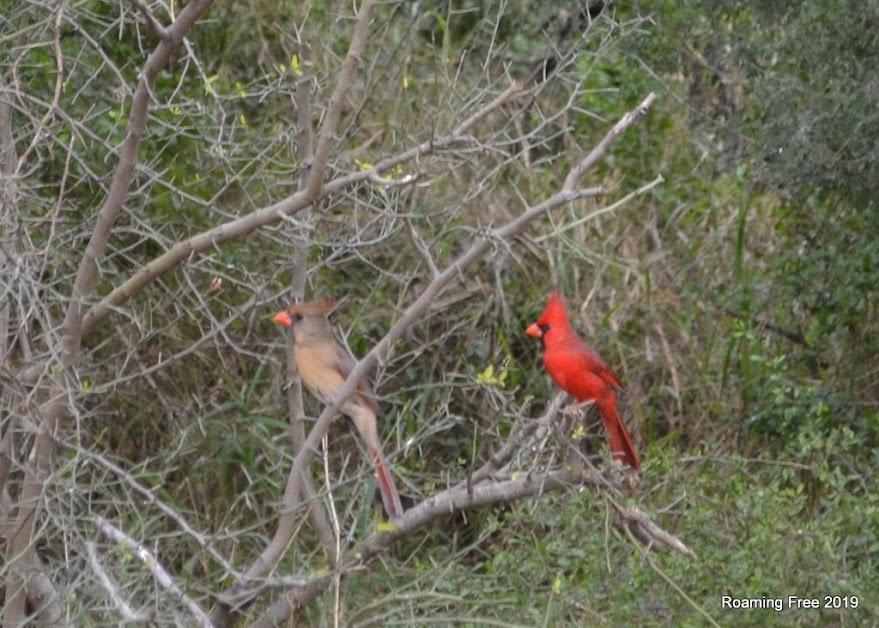 and I got this classic Cardinal shot. 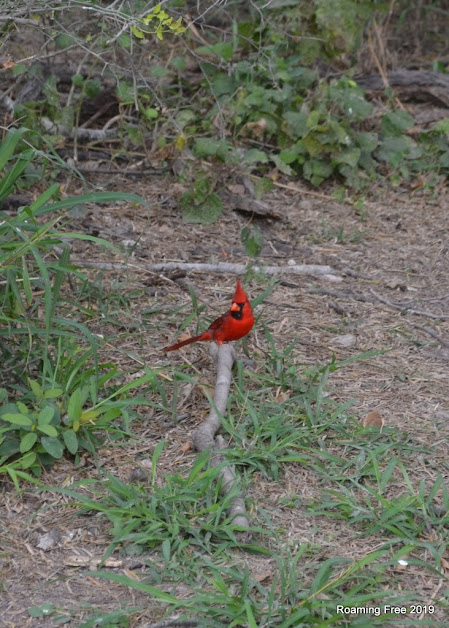 After the tram drove away, a few chachalacas showed up, too. 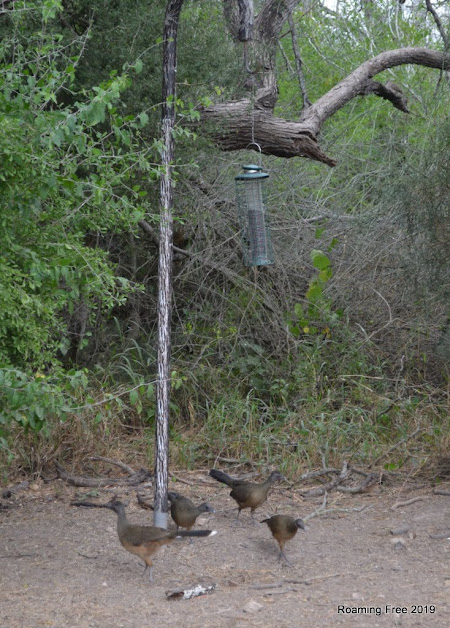 It was a nice day – we enjoyed watching the birds that we saw, and got in about 7 miles of riding in the park.  When we left the park, we rode through both RV Resorts, adding another couple miles to our ride.  They are nice RV Resorts – probably the nicest in the valley – but Mission is at the far western end of the RGV, quite a bit further from the Gulf, if you like to go to the beach.  It seems like the area we are in is a little more centrally located, although there are more activities aimed at the Winter Texans in the Mission/McAllen area . . . I guess it depends on what you are looking for.

Email ThisBlogThis!Share to TwitterShare to FacebookShare to Pinterest
Labels: Texas