It's Easter week and the boys are on vacation from school, so we headed to Indiana in the RV.  We would have rather joined the RV-Dreamers in Myrtle Beach, but we thought the more prudent destination for us was Camp Newmar, where we could get a few last warranty items taken care of. 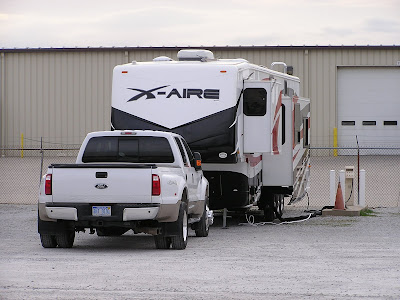 We arrived early on Sunday afternoon, finding the campsites almost full . . . we got one of the last sites, though, and got ourselves settled in.  Since it was Easter, we thought we'd go for a nice dinner at Amish Acres.  Arriving just after 5pm, though, we found out that they were closing, and we could not eat there.  The girl at the front desk felt bad about turning us away, so she sent 2 pies home with us!  We took a drive through town and didn't see much open at all.  There was a Steakhouse/Tavern that was open and we stopped to take a look at the menu.  The owner came out on the sidewalk and assured us that the food was great and we should come on in!  We decided to try it, and he was right -- the food was very good, and we were really impressed by the salad bar!  The "tavern" area was pretty smoky, but the "family room" in the back was non-smoking, and convenient to the salad bar.  Back at the RV, we took Casey for a walk, and met several of the other campers.  We had an appointment for Monday morning, and one of our fellow campers informed us that the technicians arrive at the RV doors bright and early at 6 am!  We decided that we'd better turn in early, so we could be up and ready in the morning.

Sure enough, it was still dark out on Monday morning when our technician knocked on the door.  We reviewed our list of items, which included the landing gear motors, a broken roof ladder, and the furnace which wouldn't ignite.  Our trailer got towed away, and we waited in the customer lounge for the sun to come up.  We headed out on foot, and found a couple of geocaches that were right on Newmar's property.  Next stop was the Ayr Cabinet Shop down the road to pick up a few hinges for our kitchen cabinets at home.  From there we found a little country store where we picked up some bulk food items and a really cool pasta cooker for the microwave . . . I can't wait to try it out!  We visited Bremen and Mishawaka, and finally ended up at the MH/RV Museum in Elkhart. 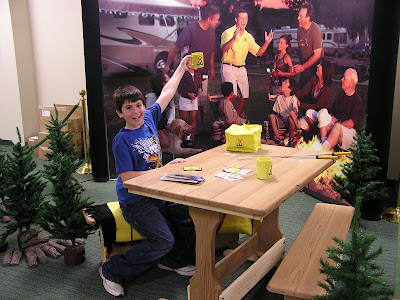 We really enjoyed our visit to the museum, and saw lots of really cool old trailers! 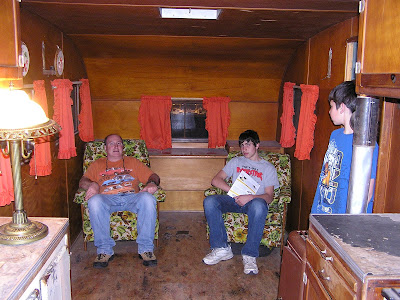 Arriving back at Camp Newmar, we found that our landing gear and ladder were fixed, but they were waiting for a new gas valve for the furnace.  It was due in around 10 am on Tuesday, so at least we'd be able to sleep in a little longer!  We had a quick dinner, and then took a walk around the grounds of Amish Acres.  We saw lots of cute little buildings, and a few animals -- they were a little upset by Casey's presence, though, so we didn't stick around too long! 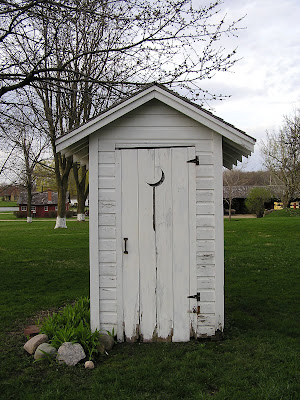 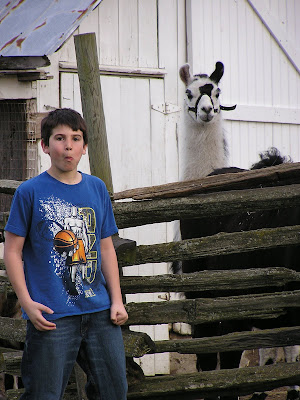 On Tuesday, we tried a couple more geocaches in Nappanee, but un-successfully!  I'm sure we were at the correct locations, but just could not find the containers!  We went back to Newmar in the afternoon for the tour -- they just started production on 2011 models last week.  Our gas valve never arrived, so we're still here tonight, and hoping that it arrives tomorrow morning.  Our plan is is spend a couple of days in Shipshewana when we leave here, and then head home for the weekend.  Hopefully we'll be able to move on tomorrow.

At least the weather has been good -- all the rain and severe weather has been going north of us so far -- and it's better than being at work!!  No wi-fi here at Camp Newmar, so I won't be able to post this right away -- maybe not until we get home!