In the RV world, they say, "If you don't like your neighbors or your neighborhood, just move someplace else!"  Well, that's just what we did -- but we brought our neighbors with us!

Tom got home from work early yesterday, and the kids and I had the RV all ready to go for our week-long stay at the Wild Cherry Resort, north of Traverse City.  We hit the road at 3:30pm, and opted to take the less-traveled US-127 north, rather than I-75.  It turned out to be a good decision, as we had no traffic and were able to cruise right along.  The trip was approximately 260 miles, so we couldn't quite make it without stopping for diesel (well, we probably could have, but barely, and we weren't taking any chances!)  We stopped at a Shell station on the south side of Traverse City and filled up for $2.89/gallon.

From there, we continued on up to Sutton's Bay in the Leelanau Peninsula, and arrived at the Wild Cherry Resort at 8:30pm.  After a trip around the main loop of the campground to get turned around (because the sites were angled in the wrong direction), we parked easily on our spacious site. 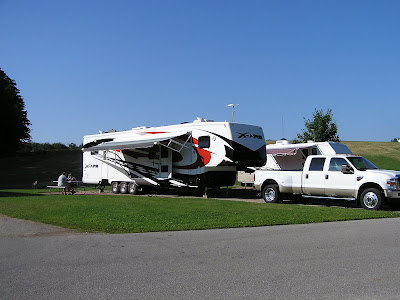 Our friend, Todd, was already there on the site next to us.  Other than the sites being spacious and having nice grass, the park really didn't have much to offer for the $49/night we were going to pay -- no bath houses, no pool, no playground, no store, no firepit on our sites . . . nothing.  We had each just paid for the first night so far, so we didn't set up completely, and spent some time searching the internet for alternative campgrounds (that is, when their WI-FI finally started working around 11pm!)  We found one down in Empire (about 30 miles away) that had openings for the week, so we thought we'd sleep on it and decide in the morning.

The temperatures dropped nicely overnight, and it was great sleeping weather!  In the morning, we took a walk through the cherry orchard, 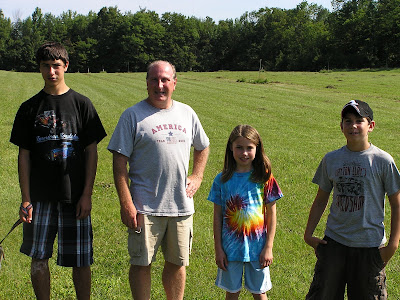 and made an attempt at bargaining on the per night rate.  No luck there, and the kids really wanted to leave, so we packed up and checked out. 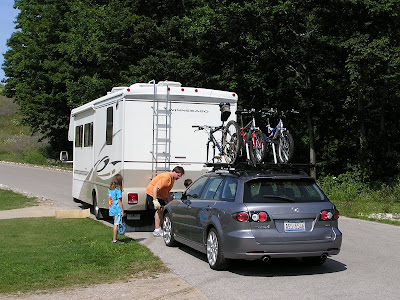 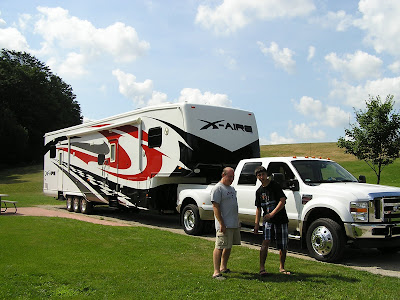 We arrived at the Indigo Buffs Rally Park around 12:30pm, got checked in, and were escorted to our side-by-side sites. 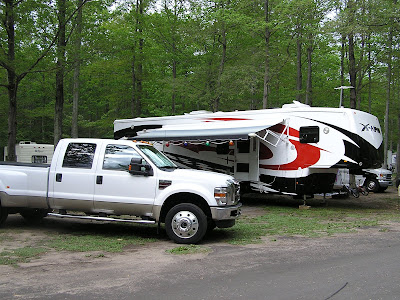 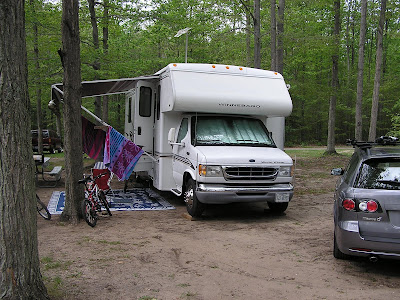 Indigo Bluffs is really two campgrounds in one -- the "Rally Park" is an older campground, fairly wooded, with dirt/grass sites (more dirt than grass) that has both full-hookup and water/electric sites, and the "Bluffs" is a "Class A only" motorcoach resort.  Those sites are really upscale (stamped concrete, 100 amp service, fairly spacious), and are primarily owned by individuals, although the sites that have not yet been purchased can be rented out -- but only by Class A motorhomes.  We're on water/electric sites for $36/night.

The two campgrounds share a common office/store and pool, which we checked out as soon as we got set up and had some lunch. 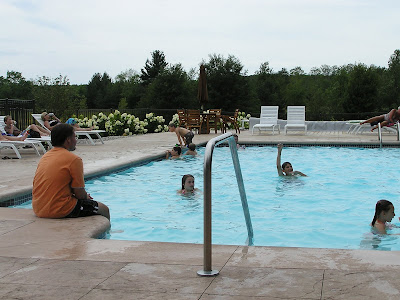 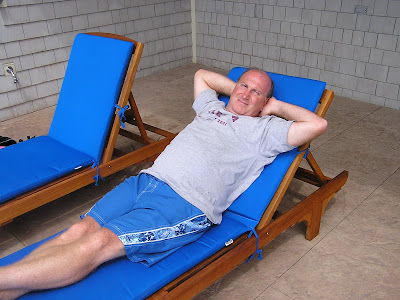 The kids are much happier here -- they have places to play, ride their bikes, and of course, the pool to enjoy!  We like it too -- it's not as "clean" as when you have paved sites and lush grass, but it's a nicer atmosphere, and we like it better.  We're also much closer to the action -- just 3 miles outside Empire puts us very close to a beautiful Lake Michigan beach, and Sleeping Bear Dunes!